World RX ready to mix it up with DTM at Hockenheim

World RX ready to mix it up with DTM at Hockenheim 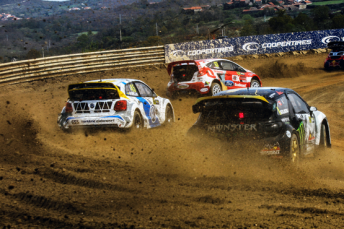 A total of 22 World RX Supercars including the permanent World Championship drivers will compete at the famous Hockenheimring, which has also been home to the German F1 race.

Joining World RX for the first time this year will be the all-new JRM Racing team which will field two MINI Countryman RX Supercars driven by Americans, Danny Way and Dave Mirra.

JRM is an FIA World Championship-winning team based in the UK and will be present at selected RX events this year as a World RX development team.

Mirra and Way, who will both drive for the team, are global superstars in BMX stunt riding and skateboarding respectively.

But both men have previous experience in rallycross having contested various events in the US, Europe and the UK.

Way, a multiple Guinness World Record holder, explained: “Our goal is to try and put a full programme of events together for 2016, but we need some good World RX experience this year to help take things forward.”

JRM Executive Director, James Rumsey, added: “Dave and Danny watched the development of World RX in 2014 and were hugely impressed.

“They want to be part of the series in the future so Hockenheim is a good event for them to get a feel for the series and our MINI.”

Foust – who will compete as a wildcard entry for Marklund Motorsport – will contest four RX rounds this season and remains the first and only American to win a round of the FIA’s newest World Championship.

EKS owner Mattias Ekstrom will race solely in DTM this weekend and will be replaced in the Audi S1 Quattro by GT racer, Edward Sandstrom. Team-mate Anton Marklund, however, will have a busy schedule as he prepares to race both in World RX and the Audi TT Cup, a support category to DTM. Marklund Motorsport’s Topi Heikkinen will do the same.

Martin Anayi, World RX Managing Director for IMG, commented: “We are very excited to work alongside ITR on this multi-year partnership with DTM, which I firmly believe will benefit both forms of motorsport.

With more than 140,000 spectators expected to attend the DTM season-opener, our partnership with ITR will showcase World RX to an entirely new audience who I am convinced will love our flame-spitting 600bhp Supercars and wheel-to-wheel racing.

It is a great honour to join with DTM and there is a natural link with two-time DTM Champion Mattias [Ekstrom] competing at the majority of our World RX events.

We are also delighted to welcome JRM Racing to World RX for their first event of 2015.

The British team has worked relentlessly over the past few months to get this project off the ground and it’s extremely encouraging to see another manufacturer [MINI] join World RX.

We now have all the ingredients in place to showcase the diversity of our Championship to a brand new audience.”

From a Cooper Tire point of view.

Matthew Vincent, Development Chemist – Motorsport, Cooper Tire Europe, spoke of the challenges of Hockenheim: “The dust has barely settled from building this new track and the impact it will have on the tyres is unknown.

“We don’t know if the Tarmac will be abrasive or smooth; if the dirt is soft and fine or hard and sharp – these are all things we have to consider.

“However, these tyres have been driven on NASCAR Tracks in America, reached temperatures of 130C, taken the force of a one-ton car landing a jump and much more.

“Working closely with IMG and the FIA, we can help ensure there are no nasty surprises but it’s not until the cars hit the track that we will really know.”