World RX crosses Atlantic for Canadian round at GP3R

World RX crosses Atlantic for Canadian round at GP3R 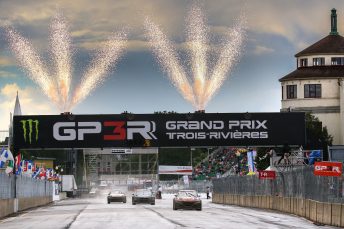 The FIA World Rallycross Championship presented by Monster Energy will return after a five-week summer hiatus as the teams travel out of Europe for the first time in 2017 for World RX of Canada this weekend (4-6 August).

For the fourth year in a row, World RX joins the Grand Prix of Trois-Rivieres (GP3R) – now in its 48th year – for a week-long motorsport extravaganza. Joining the 20 World RX Supercars in Trois-Rivieres for the first fly-away event of the season will also be 17 RX2 cars.

The rallycross Supercars and RX2 cars will kick off the motoring festival on the only street-race circuit of the season along with Formula Drift, Supermoto and SuperQuads. NASCAR Canada, Porsche Coupe Challenge and Canadian TouringCars will follow after the rallycross weekend.

Sweden’s Johan Kristoffersson leads the headline Supercar category going into Canada, thanks to a dominant display in the first half of the season including three victories [Belgium, Norway and Sweden]. He is 31 points clear of former World RX Champion and PSRX Volkswagen Sweden team-mate Petter Solberg who won the Canadian leg of World RX back in 2014.

Last year’s Canada RX winner Timmy Hansen will be hoping to secure his first victory of the season, having reached every final so far this year and reigning Champion Mattias Ekstrom will return to World RX duty having missed the previous round at Holjes.

“Three successes so far aren’t bad but in Canada, we’re bent on winning our fourth big trophy,” explained Ekstrom. “That’s absolutely realistic because this fast track suits me and our Audi S1 EKS RX quattro. It has a spectacular long straight and two jumps which are really good fun.”

After retiring from the cross-country Silk Way Rally last month due to a sprained wrist, Team Peugeot-Hansen’s Sebastien Loeb will be eager to put his injury to bed and hold onto fourth in the standings. Hoonigan Racing Division’s Andreas Bakkerud is just one point behind Loeb in the overall leaderboard and will join his team-mate Ken Block in the team’s second Ford Focus RS RX Supercar.

“I’m very honoured to have been chosen to race – for me it’s always been a dream to be part of a World Rallycross weekend,” explained Hamilton. “Being an on-road driver myself, I’m really looking forward to doing some off-road stuff, to drift and control the car on different terrains. I’m just going to go out and have fun – I’ve got a lot to learn but I’m really looking forward to it and I’m definitely up for the challenge.”

The RX2 International Series presented by Cooper Tires will also be in action in Canada for round five of the year. Reigning champion Cyril Raymond continues to lead the way, but now by a reduced margin of six points after Britain’s Dan Rooke clinched the victory at the previous round in Sweden.

Experienced driver and multiple freeriding World Champion Guerlain Chicherit will make his RX2 series debut with Olsbergs MSE, while America’s Cole Keatts will also make a one-off appearance in RX2. At 16, the Idaho-born teenager will be the youngest contender in the field. “I’m really excited, if also a little apprehensive,” admitted Keats. “I raced at Trois-Rivières last year and it’s an amazing circuit. It’s fast and technical in equal measure, with a couple of particularly tight corners that make it a real challenge – but the calibre is so high in RX2 that I have no doubt the regular drivers will pick it up very quickly.”

From a Cooper Tires point of view. Paul Coates, General Manager – Motorsport, Cooper Tire Europe: “After the journey across the Atlantic ocean the Cooper rallycross control tyres will be fitted up by our American service operation and face the challenges of this season’s only street circuit race. The tyres really do go from the rough to the smooth here with a jump added in for even more action. The quick tarmac sections really work the tread compound and we can easily see temperatures of 100°C but the quick transition to a fine dirt helps keep temperatures under control.”