World champion to line up in Monarto

World champion to line up in Monarto 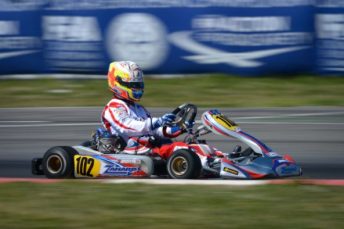 The Zanardi Corse Australia team will welcome 2013 World Karting Champion Tom Joyner to their line-up at the upcoming Australian Kart Championship round (May 26-28) in Monarto, South Australia.

The 25 year-old Englishman will join the Adelaide-based team to compete in the highly-competitive X30 class that is expected to feature a capacity field of 40 drivers.

It will be the second time Joyner has competed in Australia having made his debut Down Under at the final round of the 2015 Championship where he finished ninth in the KZ2 gearbox class.

“Everyone in the team is very excited to have Tom come to Australia and race in a round of our National Championship – particularly at our home round,” said Zanardi Corse Australia’s David Brewer.

“He was a great asset to us in 2015. It was at this event where he showcased not only his driving ability but his all round infectious personality. Tom’s commitment to racing karts is second to none and it was great for all our team to be able to evaluate how he goes about his race weekend.”

Joyner was impressed with the high-level of competition during his previous visit and is conscious that the level of talent continues to rise in Australia.

“I’ve raced in many parts of the world and I can assure everyone that the level of talent in Australia is right up there with the best in Europe,” said Joyner.

“The Zanardi chassis has enjoyed some great results all around the globe and I look forward to helping the Australian team to achieve the same.”

Joyner will be accompanied in his 10-day trip to Australia by his Chiesa Corse mechanic Hernan Chiaramello. The Australian appearance by Joyner and Chiaramello is made possible courtesy of the support from Jecko Racing Seats, Chiesa Corse and IAME Engines.

It is anticipated that more than 220 entries will be received across nine classes for the Round Three of the 2017 Australian Kart Championship presented by Jayco and Castrol EDGE. Official practice for will be held on Friday May 26. This will be followed by qualifying and heat races on Saturday May 27 ahead of the finals on Sunday May 28.

The Monarto Karting Complex is located on the Old Princess Highway, Monarto. Admission is free for spectators.