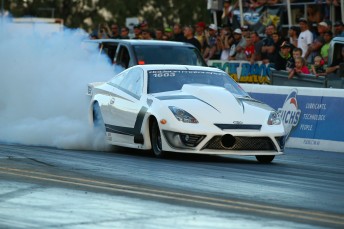 acer  in his Mitsubishi Eclipse, while Axiak became the fastest All Motor racer in Australia in his Mazda RX7.Also drawing the applause of the crowd were Harvey’s fellow event winners Dion Amato (Pro Turbo), Kelly Bettes (Pro Compact), Justin Wilkinson (Modified 10.5), Fabian Romanin (Extreme), Joad Fardell (Modified Compact), Andrew Robinson (Street 289), Ben Cavanagh (All Motor), Daniel Harding (Street Compact), Nathan Hagenson (Pro 289) and Sam Fenech (Outlaw 10.5).“To have clinched the fastest elapsed time and mile per hour for a sport compact car in the world, and get the Factory Xtreme win for the Brisbane Jamboree – one of my favourite events – is fantastic!” said Harvey, who reset the speed marker to 6.123 seconds and 238 miles per hour (approx 383kmh).“Two years ago, or even one year ago, I would have thought it was unachievable to go that fast in one of these cars, so it is a really good result and one that we have been working hard towards for the last six months.“It is definitely a great feat for the team, but there is always someone around the corner trying to beat you so we will certainly keep pressing forward. Our advantage is that we now have data at that level so we can build on that and keep moving forward.”Jett Racing team owner Willshire was pleased with his outfit’s Jamboree performance, with team racer Kelly Bettes topping off Willshire’s record performance (6.573s at 223mph/359kmh) with a win in the Pro Compact bracket for the second year running.“We obviously had a great weekend, it was a pretty big Jamboree for us with the world mile per hour record for a four cylinder drag car and also the Australian elapsed time and mile per hour records, plus Kelly winning Pro Compact again this year,” said Willshire, whose team is supported by Garrett Turbos and Motul Oil.“We knew the car had it, it is just been a matter of fine-tuning some bits and pieces to get on top of it, and obviously now our goal is to get the world record for the elapsed time as well.“When you think about the fact that the six cylinder guys were only starting to do 222 mile per hour runs a few months ago it is pretty massive that we have been able to do it in a four cylinder car, and now we really want the world record in ET – as we have run that massive mile per hour we know the car has got it, we just have to get the first half of the track run sorted and we will be right.”