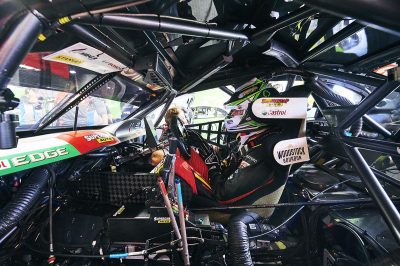 The beverage brand is supporting Mostert on and off the track throughout the 2018 season and is also proud to be partnered with Tickford Racing and the Supercheap Auto Racing Team in backing Mostert’s Number 55 Ford Falcon FG X.

Woodstock Bourbon has been involved in the Supercars Championship for the past three years and sponsoring Mostert is the next exciting step in their association with the sport.

To celebrate, it will launch a unique social media content series as well as running a range of promotions throughout the season to connect with fans of Mostert and the Supercars arena.

Michael Edmonds, General Manager of Marketing at Asahi Premium Beverages, has been impressed by Mostert’s skill and character both personally and professionally and believes the accomplished driver embodies the same values as the Woodstock Bourbon brand.

“Over the past three years, Woodstock has enjoyed a strong association with Supercars and we are looking forward to growing that for 2018 and beyond. We are very excited to now officially support Tickford Racing and Chaz Mostert, building our association across both team and driver behind Supercheap Auto Racing. Chaz perfectly embodies our Woodstock consumer as a successful, hard-working and fun-loving character who doesn’t take himself too seriously,” says Edmonds.

Similarly, Mostert is ecstatic to have the support of the iconic beverage brand and is enjoying success with them both on and off the track, saying:

“I’m excited to partner with Woodstock Bourbon. It was great racing against them last year but to be teamed up with them this season is even better. I’m looking forward to getting some more great results in the second half of the season and I’m glad that Woodstock Bourbon is there to back me and give me the extra push.”

Tickford Racing is also excited by the new sponsorship:

“We are absolutely rapt to be partnered with Woodstock Bourbon. Woodstock is a high-profile brand with high-quality products, and we at Tickford Racing aim to produce high-quality race cars, so it’s a natural partnership that offers excellent opportunities for both parties on and off the track. Obviously, Woodstock has a strong history in Supercars over the past few years, and together we look forward to writing a winning future,” says Tim Edwards, CEO of Tickford Racing.

Mostert has represented Woodstock Bourbon since the beginning of the 2018 Season when he claimed an uninterrupted streak of eleven Top 10 place finishes before a mechanical failure hampered the 26-year-old’s results at the Tasmania SuperSprint.

The 2016 Bathurst Champion is currently sitting 9th in the field of 26 Supercars Championship Drivers and is looking forward to getting back on track following some breakthrough test days.

Mostert’s next round in the 2018 Virgin Australia Supercars Championship will be the Townsville 400 from July 6 – 8.