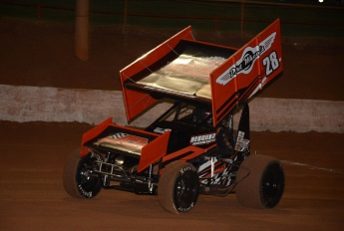 A fantastic night racing at Ausdeck Patios Archerfield Speedway on Saturday evening (October 28) culminated with a superb Sprintcar feature race that saw Allan Woods surge late to emerge triumphant in round four of the East Coast Logistics Track Championship. In a race that had four different leaders, Woods was simply too good when it mattered most, beating Mitchell Gee and Callum Walker to the chequer in a remarkable race. Peter Lack, who started from pole position and led the early laps, finished fourth ahead of Ben Hilder, with series leader and defending champion Luke Oldfield climbing back to sixth after spinning early.

In their first hit-out for the season, Dirt Modifieds also turned on the action with Andrew Pezzutti proving too strong in the feature event. In a frantic finish, Terry Leerentveld leapt into second spot, pouncing after a late-race restart to relegate Ray Klarich to third.

The first sign of changes to the established order of the season thus far came as early as time trials when Brent Kratzmann recorded his fastest ever lap at 11.312 to emerge with KRE Fast Time. Scheuerle was second best (11.340) ahead of Oldfield (11.369), Mick Sauer (11.429) and Gee (11.514). Walker, Hilder, Lack, Brad Ayers and Karl Hoffmans completed the top ten, with Woods further down the order in 15th, albeit less than half a second behind Kratzmann. For Andrew Marks, his night was over before it really started when he, clouted the turn two wall and tipped over.

Lack got the heat racing under way with a win over Gee and Kratzmann, while Brock Dean downed Woods and Oldfield in heat two.

A spin from Steve Greer while leading heat three proved costly, relegating him to the B Main as Hilder surged clear to grab the win in advance of Walker and Andrew Corbet.

The final heat of the night went the way of Dan Murray, while another runner-up finish from Woods ahead of Lack would see him climb to position 10 on the feature race grid.

Having emerged as top qualifier, Kratzmann lucked out in the pre-race grid draw for the Dash, selecting position six as Lack found himself on pole position and took maximum advantage of his good fortune to lead all 6 laps. Walker finished second to join Lack on the front row for the feature, followed home by Oldfield, Gee, Hilder, Sauer, Scheuerle and Kratzmann.

The B Main produced all of the drama expected from a last chance qualifier and it was Andrew Liebke who took the race to lead Brodie Tulloch, Greer and Mitch Gowland in transferring to the back of the feature race field.

In the main event, Lack leapt from pole position to lead the opening laps from Walker, Oldfield and Gee. However, Walker wasted little time in making his run for the lead and used the high line to greet effect to sweep around Lack and take control. Sauer’s race ended on lap three when he crashed in turn one after contact, while lap six saw Oldfield spin in turn two while running third, resuming from the rear as Gee inherited the position. Soon enough, Gee also deposed Lack and set off in pursuit of the lead, pouncing when Walker – who had inexplicably moved away from the high part of the track that carried him the front – made a minor miscue exiting turn four on lap 16. Woods, meanwhile, was making steady progress through the field, having advanced to fourth after 10 circulations and then taking third from Lack on lap 15. Five laps later, Woods deposed Walker for the runner-spot and then completed his mission when he gazumped Gee with less the five laps to run. In finishing second, Gee booked his second podium appearance of the season, while Walker was delighted with third but no doubt rueing what might have been. Behind Lack, Hilder and Oldfield came Ayers, Dean, Scheuerle and Murray, with Liebke, Gowland, Tulloch, Corbet and Greer completing the finishers.

The Development Sprintcar events culminated with an exact replica of the results from the previous round when Peter Campbell won both heats before leading home Kris Jennings and Aleesha Woods in their feature race, which also doubled as the C Main. Jason King, Andrew Baumber and Libby Ellis completed the finishers.

A strong 18-car field of Dirt Modifieds fronted for competition and their opening heat race for the season saw Garry Wathen prevail over Sam Bruggy and Ray Klarich.

Pezzutti was untroubled in winning heat two ahead of Andrew Firth and Leerentveld, with Australian champ Kevin Britten rebounding from the back to finish fourth after an early spin.

Klarich cleaned up in heat three, outpacing Pezzutti and Leerentveld while Britten exited after contacting Pezzutti as both drivers looked for an outside run on a slower car.

Starting from pole position, Pezzutti led throughout the 25-lap feature race, with Klarich slotting into second spot ahead of Firth and Leerentveld. Confined to starting from position 13, Britten proved the big mover through the field, using the cushion high on the track to advance positions and his persistence paid off when a pile-up in turn one with just four laps remaining saw him elevated into the top five as the likes of Bruggy, Firth and Wathen headed infield with varying degrees of damage. The interruption proved costly for Klarich as Lerrentveld pounced to surge into second, with Phil Roberts finishing fourth ahead of Britten, Zac McDonald and Josh Rose, while Marcus McKenzie and Mark Connolly were the the only others to go the distance.

Heat four produced another Williams win, although this time it was Graham Williams who kept his namesake at bay for a narrow result, with Royce Harvey third on this occasion.

From pole position, it was little surprise to see Liam Williams lead throughout the 15-lap feature race to take out round three of the KRE Race Engines Championship Series. Firstly fending off the advances of Graham Williams and then withstanding a late surge from McNamara, Brown finished in second spot. McNamara filled third from Williams, Ogilvie, Marshall Lewis, Kurt Wilson and Cameron Bertuch, with Randy Morgan and Tristan Johnson rounding out the top ten. Hard luck stories amongst the strong 19-car field included Mitchell Whittaker and yet another Junior graduate in Brady Argles, both of whom crashed out.

Compact Speedcars also produced a great field as the quality and quantity of drivers in the category continues to grow. Trent Usher, Tim Farrell, Matt O’Neill and category veteran Wayne Corbett visited victory lane during the heats, while the feature race quickly developed into a two-horse race between Farrell and O’Neill, whose heroics from the previous meeting were still fresh in the mind of those who witnessed it. In the end, it was Farrell who prevailed as O’Neill found himself under pressure from a fast-finishing Trent Usher. Dave Collins collected fourth, followed by Glenn Wright, Steve Swingler, Corbett, Bernie Clarke, Richard Rooke, Graeme Flynn and the rest

Ben Robertson was far too good once again in the Open Sedan B ranks, collecting another feature race win ahead of Merv Price and Robert Gorman.

In the Open Sedan A feature, it was the Super Sedan-mounted Ray Lane who proved too pacey, leading home the Late Model of Robin Bains, with Wayne Kirkman third ahead of Michael Taylor and Bob Ware.

Ronnie Young romped home against a depleted field in the Ford vs Holden vs Sigma feature race, finishing more than 13 seconds clear of Troy Price, with Michael Laver the only other finisher in third.

Next Saturday night (November 4) at Ausdeck Patios Archerfield Speedway will feature round three of the Polar Ice Midget Track Championship and round two of the Shock Absorber Therapy AMCA Nationals Track Championship, plus Late Models, Lightning Sprints, Ford vs Holden vs Sigma sedans and Vintage Speedway.