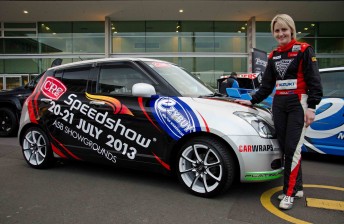 Emma Gilmour, Kat Benson and Deborah Day are among the first confirmed participants set to feature at the 2015 CRC Speedshow as part of a 20-strong display celebrating New Zealand’s top female racers, organisers and personalities, highlighting the great contribution females make to motor sports both here and around the world.

Dubbed the Women in Motorsport display, the new display aims to showcase women and girls who participate in both two and four-wheeled motor sports, so naturally Gilmour, Benson and Day were chosen for their already established successes.

Ross Prevette, CRC Speedshow’s managing director says the Women in Motorsport display concept was formed following the Kiwi Young Guns display at last year’s show, after show visitors commented on the incredible female talent that already existed in New Zealand and was highlighted on the stand.

“We are incredibly excited to have this special display at the CRC Speedshow this year. There is no doubt that women are passionately contributing to motor sports here and we simply wanted to highlight and celebrate their achievements as they continue to build very successful motor sport careers,” said Prevette.

“We are also very fortunate to have support from the New Zealand Women in Motorsport organisation who aim to promote and inspire women to get involved in all levels of motorsport.”

The first fast-female to confirm participation in this year’s show is Dunedin’s Emma Gilmour, who is internationally recognised as a very competitive rally and rally-cross driver. Gilmour has enjoyed success both here and aboard, and was previously part of the Federation Internationale de l’Automobile’s (FIA) women’s commission alongside many influential women including Michèle Mouton and Monisha Kaltenborn.

Gilmour said: “I think it’s brilliant that the CRC Speedshow is recognising the large contribution that women make to motor sport in New Zealand. I also think it’s great that they’re showcasing all of the different areas that we excel in because it’s an awesome way to get more women involved and excited about motor sport so it’s definitely something I wanted to be part of.”

Kat Benson, known domestically for her distinctive pink and purple Mitsubishi Evolution, is also a confirmed participant after enjoying success in time attack (circuit) racing. Only last weekend, Benson managed to secure second in the Pro Street class as part of the New Zealand Superlap Series.

The final participant to be confirmed at this early stage is Deborah Day, one of New Zealand’s top event organisers, who is also set to feature on the display because of her ability to run some of New Zealand’s biggest race meetings, including the V8 Supercars ITM 500 event at Pukekohe.

Day also runs the volunteer marshal group called “The Motorsport Club”, is part of the Women in Motorsport organisation, and currently holds the highest Clerk of Course licence granted in New Zealand.

Day said: “I’m delighted that CRC Speedshow is getting in behind Women in Motorsport in New Zealand. It is obvious from the commitment and talent shown by the likes of Emma Gilmour that New Zealand women are punching well above their weight in our sport, internationally as well as back here on the local scene.”

“Gone are the days where motorsport was male dominated as women and girls are giving it their all and competing on an equal footing across all levels of motor sport.

“It’s humbling for me to be selected as part of the Women in Motorsport line up as I hope I can show women who love motorsport, but aren’t interested in competing, that there are other avenues within our sport to be involved with.”

The final selection of the 20 stars will be made by CRC Speedshow over the coming weeks, with fans also given an opportunity to have their say on the show’s Facebook page later in May.

For more information about the 2015 CRC Speedshow, visit the event’s website at www.speedshow.co.nz. Or to connect with the Women in Motorsport organisation, see https://www.facebook.com/womeninmotorsportnewzealand.