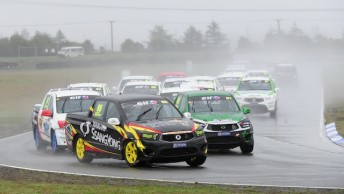 MEDIA RELEASE: Nineteen female motorsport stars are confirmed for the special Women in Motorsport display powered by Century Batteries, which features at this year’s CRC Speedshow celebrating the incredible achievements made by females in motorsport.

The incredibly talented line-up covers a wide range of motorsports and related professions, including international guest Jessi Combs, mechanic Frances Buckley and event organiser Deborah Day, to highlight women from all areas of engine-related sports during the two-day show held on 18 and 19 July in Auckland.

Century Batteries Sales and Marketing Manager, Ward Lye, says: “In what used to be a male dominated sport and industry, women are certainly making their mark; whether that be on the race track or using their technical talents behind the scenes. Century Batteries are proud to continue our support to all competitors out there, including these women who are leading the charge in what they do.”

Included in the line-up is New Zealand’s most successful rally co-driver (navigator), Sara Mason, who has now won 25 New Zealand Rally Championship (NZRC) rounds alongside her husband and multiple NZRC champion Richard Mason. Joining her is the youngest participant, Amy Smith, who at just 14 years old is already competitive in the Formula First category.

Meanwhile, representing the two-wheeled-motorsports are Avalon Biddle and Courtney Duncan who compete in motorcycle road racing and moto-x respectively, and who have both gained respect internationally due to their significant achievements on two wheels.

Tiffany Chittenden, originally from the United Kingdom but now living in Christchurch, is also included as she is the only female in history to have won a British karting championship.

Chittenden also works at Downforce as a professional driving instructor, is heading to the world championships in Las Vegas later this year, and in 2014 competed in New Zealand, England, Spain and the USA.

The final spot will be filled by a wildcard entry which is to be decided by a public vote currently running on CRC Speedshow’s Facebook page, finishing on Tuesday 30th June.

To have your say on the wildcard entry, please see CRC Speedshow’s Facebook page: www.facebook.com/speedshownz

More information about the 2015 CRC Speedshow can be found on the website; www.speedshow.co.nz