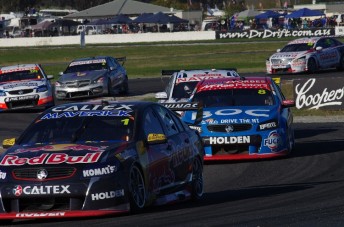 MEDIA RELEASE: Tickets have today gone on sale for the Winton V8 Supercars Supersprint, which will be held at the nation’s action track on 20-22 May 2016.

Through the Outix online ticketing system, race fans can purchase a variety of packages, including general admission and paddock passes for one, two or three days and grandstand seating.

One of the most popular features of the Winton V8 event is the availability of trackside camping, and this has been improved for 2016 with the introduction of reserved campsites; campers can view the available sites via the online map and select their preferred spot.

“We introduced the Outix system last year, and based on customer feedback, we’ve made some improvements for 2016,” Mr Williams said.

“Fans are now able to complete their ticket purchases online, and then arrive at the track and enjoy a hassle-free experience of watching Australia’s top motorsport categories.”

The Winton V8 Supersprint will feature Races 10 and 11 of the 2016 V8 Supercar Championship, along with a blockbuster line-up of support categories including the stars of the future in the Kumho Tyres V8 Touring Cars, a blast from the past with the historic cars in the Touring Car Masters, the fun-filled V8 Ute Racing Series and the brand-new Toyota 86 one-make series.

A new and improved program of off-track entertainment will also feature at this year’s Winton Supersprint, aimed at making it the most family-friendly V8 event ever held at Winton. Further details on the off-track activities will be released shortly.