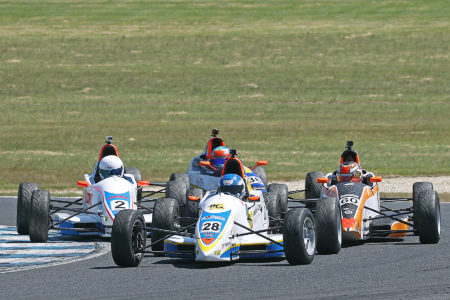 Sonic Motor Racing Services entered the final round of the Australian Formula Ford Championship at Phillip Island back with four entries as Valentino Astuti made his return after a large incident at Wakefield Park.

Astuti’s come back was supported by Enkosi as he qualified a strong ninth right behind teammate Harrison Goodman. Winston Smith proved to be well suited to Phillip Island as he lined up alongside championship winner Thomas Sargent on the front-row as Harrison Blanchard placed 14th.

Race 1 was interrupted by the safety car, but it was Smith who led the Sonic charge to be fifth at the flag, right ahead of Goodman and Astuti with both filling the next two positions. Blanchard was able to improve to 11th.
Sunday’s second race was a highlight for Sonic as Smith won out in a battle for second from Conor Somers, Noah Sands, Astuti, Cody Donald and Cameron McLeod. Blanchard finished 14th and Goodman retired after running off the track.

In the championship finale, Smith was fifth as Goodman failed to make an impression from the back of the field to be 10th ahead of Blanchard as Astuti retired during the closing stages.

This round signalled the end of Sonic Motor Racing Services National Formula Ford campaign for 2021 as the focus turns to a strong season next year.

It was good to return to Phillip Island after not being here for some time. We built the pace up on Friday and in qualifying on Saturday we struggled as we didn’t get a tow, plus didn’t get a clean lap.
We battled with some other drivers in the first race before a safety car and I didn’t get as far up the field as I would have liked.
I got a good start in Race 2, but I made a silly mistake trying to overtake in the wrong spot, so I ended up going off the track and failing to finish, which was disappointing.
For the final event, I ended up battling my way through the grid, but I had an incident and never really recovered.

Coming back this weekend, it was about getting comfortable in the car again and learning Phillip Island. I was on the pace for most of the weekend, I started ninth on Saturday and through all the races, I progressed through the field.
Going into the final I was starting fifth and I had a good run to be third one stage until all came to an end at the second last corner where I was run out of room forcing me to not finish.

I have had better weekends in motorsport, I think it’s pretty clear from the results. I’m still happy to be here, Sonic Motor Racing Services gave me a pretty strong car at Phillip Island. I had some battles over the weekend and I’m looking forward to competing in Formula Ford again next year.

It was a solid weekend, much better than Winton. We came away with a fourth, fifth and second so it was much more positive and our base was really there.
Finishing second was awesome, so I think we’ve definitely built on Winton and developed a lot more speed in that time. Now I’m just looking forward to building on that for next year and hopefully going well.