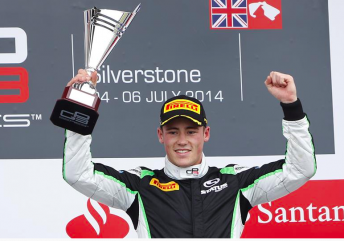 The home of the British Grand Prix proved a happy hunting ground for Toyota Racing Series graduates over the weekend.

Wanganui’s Earl Bamber was third in the hotly contested Porsche Supercup race, preserving his place in the championship. Tauranga racer Richie Stanaway stamped his mark on the high profile GP3 championship with his first win in the 2014 series. And 2012 GP3 champion

Mitch Evans (Auckland) scored his first win in GP2, the feeder category to Formula One. Earl Bamber was second overall in TRS in 2007-2008 and again in 2010, raced for the New Zealand A1GP team and has since made a name for himself in the Asian and European Porsche Carrera Cup championships. He is now second on points in the Supercup championship.

Richie Stanaway is ecstatic to have recorded his first win and closed the points gap to GP3 series leader Alex Lynn. Stanaway’s team-mate and championship rival Nick Yelloly finished second, 2.7 seconds behind to record a 1-2 for the Status GP team at their home circuit.

“It was an awesome day for us and a one-two for the team is perfect. We have really turned the car around and it is quite radically different to where we’ve been already this year. It’s working for us and we’ve got it to where we need to be,” Stanaway said.

The win propels 22 year old Stanaway closer to the championship lead. He is still third in the series but has closed to within 20 points of Alex Lynn.

Mitch Evans’ GP2 feature race win was even more emphatic, the 20 year old taking fastest race lap and top points for the category, leaping to fourth overall in the championship. “The last 18 months have been really tricky for us, for me and my family, and it’s a huge relief for everything to come together finally for my first win in GP2. It’s been far too long, but I’m really, really happy to finally get the monkey off my back, and hopefully it’s not the last win of the season!”

Meanwhile at home, a rising wave of New Zealand racing stars is embarking on the next phase in their careers.

Jamie Conroy of Invercargill has topped the annual New Zealand Motorsport Academy and is drawing support for a proposed campaign in the 2015 Toyota Racing Series.

Formula Ford national champion Conroy impressed when he drove the current FT40 TRS single-seaters at the annual post-championship test day in May.

The drive was part of his championship prize package and was presented by Toyota New Zealand Motorsport Manager Steve Boyce.