Winning start for KMS and Madsen

Winning start for KMS and Madsen 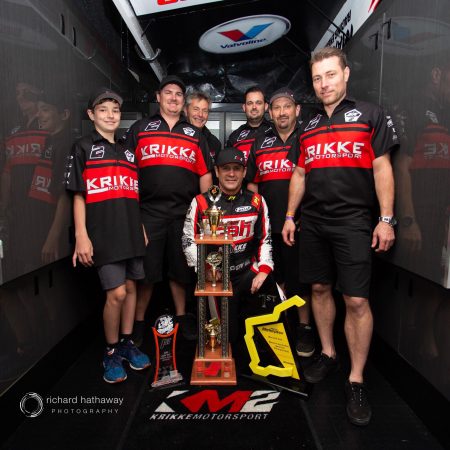 Krikke Motorsport and their new team driver Kerry Madsen couldn’t have asked for a better start to their 2018-19 season campaign together during last Saturday night’s Western Australian 410 Sprintcar Title at the Perth Motorplex, with Madsen successfully defending the team’s crown.

With fans eager to see how things would gel between the current and four-time Australian Champion and the Bunbury, WA-based team, the combo certainly lived up to expectations, with Madsen earning the pole-position start for the feature race, after what was a consistent start to the night throughout qualifying.

While he lost out slightly at the drop of the green flag, with fellow front-row starter Jason Kendrick getting the jump on him, Madsen committed to the bottom of the track, eventually reeling Kendrick back in and taking over the lead on lap five. From there, it was smooth sailing for Madsen throughout the 30-lap distance, which went non-stop.

Settling into a good rhythm and navigating lapped traffic with ease, Madsen put his wealth of experience into practice, driving a composed race and hitting each of his marks to greet the chequered flag over 10 seconds clear of his nearest rival, defending the team’s WA Title and opening their 2018-19 season winning account.

“It’s really exciting to drive for a team like Krikke Motorsport, which has such a legacy behind it,” expressed Madsen, who first won the WA Title back in 2011.

“We weren’t putting too much pressure on ourselves during our first outing together, but thanks to Dylan (Buswell, crew chief), who did a great job during the off season, we didn’t have to change too much on the car throughout the night and it really came alive for us in the feature race to give us a great run.

“Ryan (Krikke, team manager) and the rest of the Krikke Motorsport team have really put together a great operation, which is evident in our result. It’s a really good sign heading into the rest of the season.”

Getting the WA Title campaign underway by qualifying third in time trials, Madsen went on to place second and third in his respective heat races, before clinching the win in the Gold Shootout to secure his pole position feature race start.

Off the back of their successful season debut, Madsen and the Krikke Motorsport team will now travel east to Victoria where they’ll hope to back up their victory during the annual Max’s Race this Saturday night at Warrnambool’s Premier Speedway.

“We’re looking forward to heading east this week for Max’s Race and hopefully enjoying another strong run prior to the busy Speedweek schedule over the Christmas-New Year period,” added Madsen.

“It will also be a great opportunity for us to get some laps under our belt at Premier Speedway before the Grand Annual Classic in January.”

Be sure to check out Krikke Motorsport’s new range of 2018-19 season team and Madsen merchandise, which includes hoodies ($50), hats ($30), t-shirts ($30) and raglan three-quarter sleeve shirts ($40). By popular demand, the team have also introduced t-shirts in a range of kids’ sizes ($30). All merchandise is available for purchase via the team’s online store at www.krikkemotorsport.store.