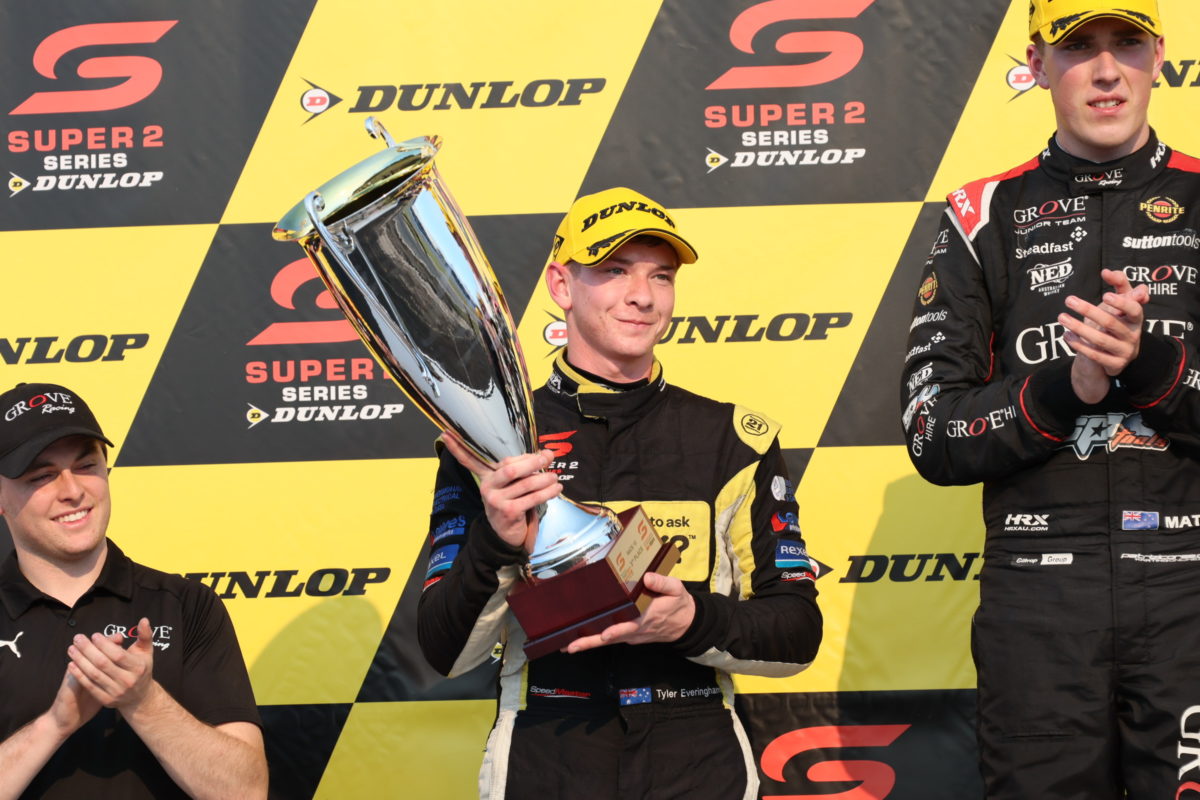 It was a winning return to the western seaboard for MW Motorsport at Wanneroo Raceway in Round 2 of the Dunlop Super2 Series this weekend.

Young star Tyler Everingham scored his and the team’s first win of the season, while fello MWM Nissan drivers Angelo Mouzouris and Thomas Maxwell enjoyed a competitive outing in Perth – the first time since 2019 that Supercars and Super2 have made the trek across the Nullarbor.

Everingham’s weekend started solidly with seventh and fourth in the opening pair of practice sessions. However, qualifying was shortened due to a late red flag catching many drivers out, leaving Everingham seventh.

A charge through the field in a chaotic opening race gave Everingham his first podium of the season as he finished third.

Qualifying on Sunday demonstrated Everingham’s pace as he placed the Blue Ribbon Legal Nissan Altima on the front-row, just 0.224s off pole position.

It didn’t matter in the race though, as Everingham made a perfect start and despite two safety car periods took his first race win for the season as he elevated himself to third in the standings.

Just aiming to build confidence and enjoy a consistent run following a disappointing opening round, Perth provided those exact results for Mouzouris.

Eighth and fourth during Friday’s two practice sessions hinted at a change of fortune for Mouzouris as he converted this pace into sixth for qualifying with more left in the tank.

Missing all the chaos surrounding him, Mouzouris finished fifth following an intense battle for the position during the closing stages.

Mouzouris repeated his sixth place performance in qualifying for Race 2 as although he dropped to eighth by the end of the event, he left Perth with a solid bank of points.

It was a case of what could have been for Maxwell, who sported new support from Anytime Fitness Meadow Springs in Perth.

Starting the opening practice session seventh was followed by an improved run to third in the second signalling Maxwell’s frontrunning pace.

Maxwell was one driver to get caught out by the late red flag to be ninth, however he moved up to be seventh in Race 1 keeping out of trouble as chaos surrounded him.

A further strong performance in qualifying followed to start Sunday’s campaign as he put his Nissan Altima onto the second row, but a technical infringement dropped him to the back.

Charging through the Super3 field, Maxwell progressed to be 15th despite a slow tyre leak hampering his progress.

Maxwell leaves Perth sixth in the standings as all three MW Motorsport drivers prepare to take on the Townsville Street Circuit on July 9-10.

“We had some bad luck at the first round, so it’s good to come here and get some decent results,” said Everingham.

“We were a little bit on the back foot in practice and we moved away from our baseline set-up, but then we ended up back at it for the first qualifying session.

“With the opening qualifying session being interrupted by a red flag, we ended up P7, but we were able to move our way forward with good race pace to be P3, which was promising.

“We were able to come out swinging today and get a P2 front-row start, which made it easier. It was all about getting it off the line, which we were able to do and led the race from start-to-finish.

“It was a good weekend for us, we just lacked a little car pace, but collected a solid amount of points,” said Mouzouris.

“I hadn’t been to Perth before and it was cool learning the track. It’s actually quite fun; it’s short, fun and intense.
“There’s a big gap now before Townsville, so we have a test planned for our Super2 car, and I’ve got some testing and racing in the Porsche at Winton soon too. So I’m really looking forward to that.”

“Not the weekend we were after,” said Maxwell.

“It started off really good, we had great pace and qualifying continued that form in both sessions. Unfortunately, I didn’t get a lap in the first one, which hurt us a little bit. The second session was really good, I put it on P3 and I was really happy with that, but we received a technical infringement, which put us to the rear of the grid.

“This hurt us and to add insult we picked up a puncture pretty much from the get-go.

“A lot to take away with the pace and I have no doubt we would have been battling in the top three if all things had lined up for us this weekend.

“I know where we want to be and where we deserve to be, so we just need a bit of lady luck on our side, and hopefully things go a little bit better for us in Townsville.”