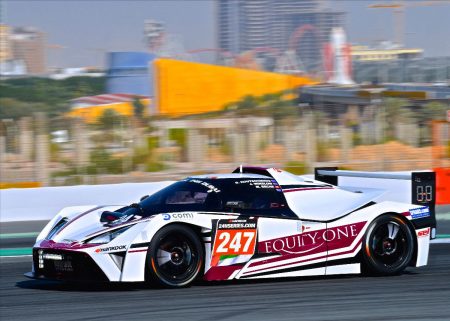 “I’d like to say a big thank you to Dean for providing this opportunity. It’s so good to be returning to Bathurst again. It’s one of those tracks that just has a kind of special aura and atmosphere when you arrive,” said Parsons.

“I have raced the GT4 class here before, in 2017, so I feel like I have unfinished business. I’ve done a lot of endurance racing since my last run at Mount Panorama, so it’s nice to come back with that extra expereince and more specific skill set. It certainly puts me on another level from when I’ve raced here before and it’ll be great to get back out on track, aiming for the podium, and class win this time. That’s our target, so it’s going to be a great weekend.”

Experienced racer Winslow, who has a long list of endurance success, including Le Mans LMP2/LMP3 Champion, is feeling confident heading into this year’s event, looking to better his 2016 finish. “It’s great to be back at Mount Panorama in the Equity-One KTM X-Bow, especially driving alongside Dean Koutsoumidis again for my fifth Bathurst 12-hours. We managed to finish second here two years ago and I’m hoping to go one better this year! The car is quick, and I’ve driven and won races alongside all three of my co-drivers, so I’m expecting us to be challenging for the class victory. Our driver line-up is exceptional, and the M-Motorsport team have really got the car going well, with an exceptional set-up, so I’m really looking forward to the challenge that awaits us.”

Tokyo based Parsons is looking forward to again pairing with Winslow, with whom he enjoyed an impressive debut endurance race victory and several podiums last year.

“It’s always good to come into a race having a strong working partnership. It makes things go much smoother as you can just build together for the race. James and I have a great track record and we’ve worked so well together across the series we’ve already driven. We hope to keep that momentum going and aim for the top step again alongside Dean and Mathias, who both have very impressive records and bring a lot of extra strength and experience to the team. I’m looking forward to working together as I think we create a really good team dynamic.”

Team boss Koutsoumidis, who finished fourth in the 2015 Bathurst 12-Hour with Winslow, is also excited to be returning to the mountain with such a strong team of drivers.

“Being part of the Bathurst 12-hour again is an exciting challenge and it’s now more than ever a truly international event,” he explained. “Having recently tried my hand at GT4 class, it’s great to see the fields growing in Australia with great drivers. This time around we have an all-star line-up, with Swiss driver Mathias joining us. He’s new to the mountain but can’t wait to experience the great track that he’s watched on TV for so many years. Also, young up and coming Aussie star Jake Parsons will be joining us, fresh from his championship winning year in Japanese F3, alongside Le Mans 24-hour driver James Winslow. Both are very familiar with Mount Panorama. Between them they’ve all had great success in LMP1, LMP2 and LMP3, so I suspect the KTM downforce won’t be too much of a challenge for them.”

Parsons certainly can’t wait to put the Equity One KTM X-Bow through its paces on one of his favourite circuits, where he still holds the Formula Ford lap record.

“Bathurst is such a unique track. It never gets old coming to a street circuit on top of a mountain!” he laughed. “I love the first proper left-hander as you start climbing up to the twisty sections. That’s when it really kicks in that you’re on Mount Panorama. Another stand-out area for me is Skyline. I can remember going through there in the Formula Ford car. It’s a pretty crazy feeling being at the top of a mountain, hearing the brakes locking up slightly as you’re flying into a chicane.”

Being such a unique, mountainous circuit can create its own unique challenges too of course, especially during endurance style events where the field become stretched out. “You never quite know what’s going to be round each blind bend, and that’s a real danger here. So, it’s good going into the weekend knowing they’re running a new system in the cars to warn us if there’s a car stopped up on the tight, twisting mountain sections,” added Parsons.

It’s clear that no such warning system is required when it comes to the M-Motorsport ‘all-star’ line-up’s intentions of gunning for victory on the Mountain this weekend.

The Liqui-Moly Bathurst 12-Hour take place at Mount Panorama on 1-3 February. You can watch the race live, free to air, on Channel Seven, and free via live streaming. Check local listings, www.radiolemans.com and https://www.bathurst12hour.com.au/streams-tv/ for more information.