Wingless Sprints back after COVID-19 break

Wingless Sprints back after COVID-19 break 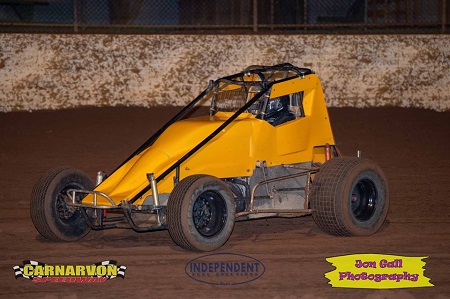 Following the premature end to the 2019/20 Australian Speedway season in mid-March due to COVID-19, action on the dirt tracks has returned in recent weeks with the Australian Wingless Sprint Racing Inc. providing events for their competitors in three mainland States. Over the past month the 2020/21 racing season has begun in the Northern parts of the country with Wingless Sprint features being conducted at Carnarvon in Western Australia and Katherine in the Northern Territory.

The season at the Carnarvon Speedway kicked off on June 20 with Cameron Holla completing a clean sweep of the racing program winning all three heats before leading the entire A-Main journey to win ahead of Emily Burston, Nathan Condo and Owen De Boni. The next meeting at Carnarvon will again feature the Wingless Sprints on July 25.

A second Western Australian venue, the Ellenbrook Speedway, will host their first meeting of the season on August 16, followed by another event on September 6.

Last Saturday night (July 11) the Katherine Speedway (NT) hosted the Wingless Sprints with Tyson Newcombe claiming the opening A-Main of the season. The podium was filled by Jarrod and Daniel Goldoni with Sean Tiedeman in the John Murdie owned #59 in fourth. Sprintcar drivers Jamie McInnes and Lachlan Cole were next while Mathew McLennan and Shane Norman completed the finishers. Dean Tillack failed to take the green in the decider.

The next event on July 25 has already received 8 nominations. The Wingless competitors will also return to the venue for night 3 of the Track Championship on August 22.

Tennant Creek will also see the Wingless Sprints in action over two nights at their “Picnic Weekend” event on the first weekend in August.

The New South Wales Club has also been proactive in getting their competitors back on track in late June with practice meetings at the Dubbo and Goulburn Speedway’s.