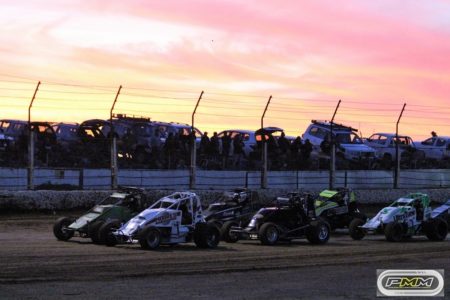 For Martin and Vickers, they will head to the track with great confidence having rounded out the podium behind McCarthy last October therefore they will be out to duplicate their success once again this weekend.

Murray Bridge racer Anthony Tapley will be looking to bounce back after failing to finish his last start at Murray Bridge. Tapley is always fast in the Andrew May owned #47 IOTICS Creative Integration, Moore Engineering Eagle and as a past winner of races such as the 50 Lapper and the Easter Cup at Mildura he knows what it takes to win.

Although only in his second season Rylan Furler has quickly become a front runner due to his years of Dirt Kart racing and the fact, he has the former Todd Wigzell Australian Championship winning car. Furler finished sixth in his last start at Murray Bridge in his LB Furler Automotive #26.

After a tough weekend at Murray Bridge, which saw a fuel surge issue plague the #71, Brett Ireland will be determined to turn a few laps at speed, and he will be an outside chance for the win if the car performs to its true potential.

The field also includes some of the rising stars of the category including Ben Cartwright, Barossa Valley based Jesse and Harley Alexander, Nicole Southby and Jenna Kervers, along with some of the veterans of South Australian Speedway including 81-year-old Norm Moore and Mount Barker based Speedcar Team Owner Darryl Knuckey.

Over the past few seasons, the Wingless class has seen an influx of talented female drivers and two of them will be in action with Nicole Southby and Jenna Kervers set to compete.

Gates into the Whyalla Speedway open a 4pm with Hot Laps from 5:30pm.

The Whyalla Speedway meeting will be third Wingless Sprints of SA event of the season with the next being at the Murray Bridge Speedway on November 6, 2021.