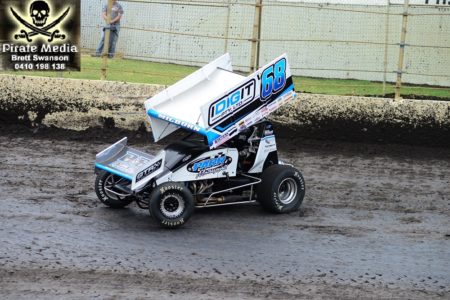 The formula one of Speedway is the Sprintcar category and this Saturday night Wangaratta City Raceway see’s the ‘Winged Warriors’ return to town to do battle in the latest round of the Victorian state series and some of the big names are in the line-up, including Albury based racer Grant Anderson.

Anderson won this past Saturday night in Moama and is a popular figure in the Riverina and North East as his father David was before him. Anderson will face competition from Daniel Pestka a South Australian making the trip over, Brett Milburn a racer who has won numerous Victorian state series or feature races, Grant Stansfield and Rhys Baxter.

Jesse Nicholas a Goulburn Valley racer is keen for a great showing locally as is Eddie Lumbar from Deniliquin who is a regular steerer in the Victorian scene. Fans will enjoy twenty plus racers flying around Wangaratta with victory on their mind. There may be spills, there will be thrills as Sprintcars dominate the action.

Supporting the Sprintcar main event will be some of our local heroes in the club sedan classes with Sports Sedans, Standard Saloons and Junior Sedans on the program.

Sports Sedan’s should have a great little battle between the likes of Caleb Lincoln, Brendan Harper and Martin Heiner. Lincoln is having a great season with consistently strong qualifying into finals, Harper is a Wangaratta local and has been fast at Wangaratta City Raceway this season whilst Heiner returns to the track having previously been a winner at Wangaratta.

In Standard Saloon action the Nissan Station Wagon at the hands of Yarrawonga racer Trevor Evans is the stand out however competition will come from Jaimi Barber, Michael Poole and Daryl Joosten all drivers from the North East region.

Marty Bassett, Marcus Maclean and Jordyn Tewkesbury will be amongst the battle for victory in the Junior Sedans this Saturday. Bassett and Tewkesbury both headed down to Daylesford last weekend for good results and Maclean has been tremendous up at Corowa and Wangaratta this season.