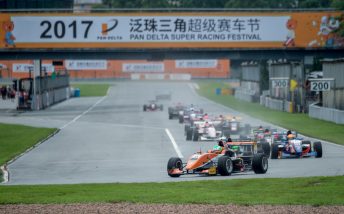 Three top four places at the latest round of the 2017 Formula Masters Series has propelled Kiwi driver Taylor Cockerton to second overall on the points tables. The Waikato University student won his second race of the five round series at the Zhuhai International Circuit of China, finished second and fourth in the other two races giving him a solid points haul from the weekend.

“We made a great start to the weekend in qualifying,” commented Cockerton. “We found a good setup for the wet and I managed to get pole by just over a tenth (of a second).”

The second qualifying session was even wetter with a number of puddles forming under some of the heavy braking zones. Having spent most of the session in ‘traffic’, Cockerton could not manage a clear lap and qualified fourth for the third race of the round. Grid places for the second race being determined by fastest lap from race one.

Similar conditions were faced by drivers in race one on Saturday afternoon with the race starting under safety car.

“We went the wrong way with race setup and I lost 2 positions in the first lap to Daniel Lu and Daniel Frost who had much stronger pace early on,” commented Cockerton.

After holding third for much of the race Cockerton took advantage of a mistake by Daniel Frost who ended up stuck in the gravel, gifting the Kiwi with second place behind Daniel Lu.

Sunday morning saw Cockerton start the second race from third on the grid. This saw him take his second race win of the series.

Starting the final race fourth on the grid, Cockerton and the other drivers were faced with a very damp track and the hard decision for wet or slick (dry) tyres. Choosing ‘wets’, the cars at the back of the grid risked slicks which ended up being the right call.

Cockerton was able to hold off a number of fast finishing cars in the last couple of laps to secure fourth place and is now firmly in second place on the points table.

“I’m really happy with the result, more points and I have moved into second in the championship.”

The fourth and penultimate round takes place 28-30 July, again at the Zhuhai Circuit before the final round at the Shanghai International Circuit 22-24 September in China.