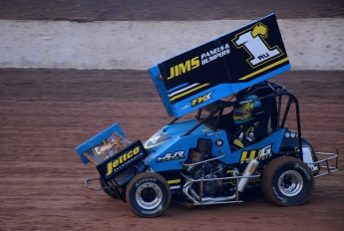 The feature race got under way with Williams jumping to an early lead, followed by Kennedy as Brown quickly claimed third from Hodges, who started on the outside front row. The only caution of the race came on lap three for a spinning Vicki Canfield. After the restart, Graham Williams continued his charge through the pack that carried him to fourth, closely followed by Piper Ogilvie and Marshall Lewis. Adrian Farrell, impressive rookie Mitchell Whittaker also greeted the chequer on the lead lap, with NSW’s Royden Alcon , Royce Harvey, Tony Bailey, Paul Chaffey and Vicki Canfield completing the finishers.

Ryan McNamara had a night to forget after looking strong in heat one. He failed to finish heat two and the feature race after encountering mechanical issues.

Bodie Smith dominated the Formula 500 Junior events, winning all four heats. Brodie Davis from Cairns produced some good performances, as did Trent Vardy, Tarhlea Apelt and Nick Whell. Newcomers to the Junior ranks in Taylor Prosser and Jy Corbet both produced plenty of pace on their opening night.

The next race meeting for both Juniors and Senior Formula 500’s will be the opening round of the 2017/2018 KRE Formula 500 Championship Series at Hi-Tec Oils Speedway (Toowoomba) this Saturday night (September 23).

The Brisbane Formula 500 Club would like to thank KRE Race Engines and Myla Graphics for the continued support.