Williams wills his way to The Island

Williams wills his way to The Island 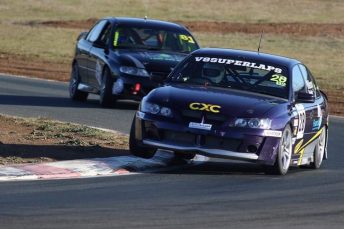 APC regular Troy Williams has joined with Dean Potts to pull off a last-minute deal to compete at the Phillip Island Grand Prix Circuit this weekend (September 8-10) at what is the penultimate round of the 2017 Australian Production Cars season.

Just days ago, it looked like Williams would miss this weekend’s racing due to car issues for the TW Motorsport Holden VE. Instead, he is now preparing to suit up with Dean Potts to contest the #28 VY HSV Clubsport in the B2 Class.

“Through a mutual friend, we figured out that Dean would be in Melbourne with his car for another event on the Friday,” Williams explained.

“That friend suggested we connect via social media as he knew that my VE wasn’t ready for the trip South and as such, I was looking at missing out on this round of the APC.

“We ended up chatting and with literally two days to go before the event would kick off, we figured out a way to combine TW Motorsport and Potts Motorsport for a Phillip Island Four Hour program.

Williams and Potts will be supported by a dedicated crew who have mustered at the last-minute to be ready for this weekend’s action.

“I am very lucky that my team members and crew have been willing to drop everything at the last minute and head South for this event,” Williams said.

“I am truly thankful and appreciative of their efforts, they are truly amazing!”

Williams, Potts and the rest of the Australian Production Cars field will hit Phillip Island Grand Prix circuit this weekend (September 8-10) for what is the penultimate round of the 2017 APC season.