Williams shaping up for B2 APC title

Williams shaping up for B2 APC title 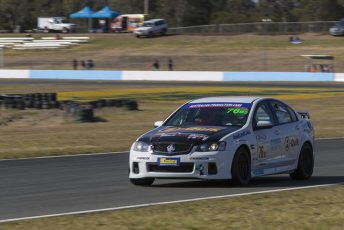 Troy Williams is in the box seat to take out the Class B2 Australian Production Car Cup this weekend at the final round of the APC season for 2017 (Wakefield Park, November 18-19), and he will do it in his faithful VE SSV Redline.

The move back to the Redline follows a switch to a replacement car for the penultimate round at the Phillip Island Grand Prix Circuit in September, due to a mysterious electrical issue in the Number 76.

Now, with that sorted, Williams is looking forward to hopefully hoisting the trophy after a rewarding weekend of racing his trusty steed at Wakefield Park.

“My crew has been working double time chasing down what was a mysterious electrical issue, and we were also very appreciative to have other APC competitors offer assistance and their own Holden experiences as we tried to track down the problem,” Williams said.

“Hopefully now we are on top of it – it is certainly looking good thus far.

“It has been a mammoth effort to get it ready though – everyone on the crew and myself included as their own jobs and businesses to continue running, so I have been really proud of how we have all rallied together to get it sorted in time for the final.

“My focus will always be to finish both races in one piece and with minimum mistakes. After that, the points and the championship will look after itself.

“Slow and steady as they say will win the race. If you look at the outright results from everyone who ran at Phillip Island for example, you can see the proof right there that good consistent running with minimal errors produces great results – the top ten cars were not those with the quickest one-lap pace, they were the ones who sustained their pace over the full weekend.”

Williams will be joined in the Number 76 at Wakefield Park by New South Wales racer, Gordon Wilson.

“Gordon and I met at the Singapore Formula One event through one of my crew members who was also in town for the F1 – we agreed over a beer that Wakefield Park was for us!” Williams laughed.

“As we get ready for the finale, as always I need to thank my crew Phil and Dan for their monster effort in preparing the car, and also my dad – he never misses any of the races and is always there to support me 200 percent.”