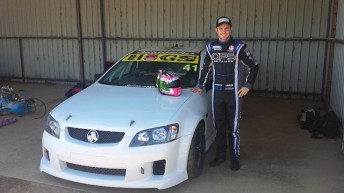 Williams Race Tech team principal Wayne Williams has finalised his driving line-up for his WRT team at the final round of the V8 Utes Racing Series to run as support to the Sydney NRMA 500 at Homebush Bay with the announcement V8 Supercar endurance driver Tim Blanchard will return to the team to drive the #41 Track Buddy Holden SS.

A former Australian Formula Ford Champion, Blanchard drove full time in the 2013 V8 Supercars Championship, and this year was with Russell Ingall in the Repair Management Australia Holden Commodore in the Pirtek Enduro Cup, and also made his V8 Ute debut at Townsville with the WRT team.

“For the Sydney round we are introducing a very special and interesting supporter to the sport as a sponsor in Track Buddy, and wanted to have a special driver on board, so we’ve signed Tim (Blanchard),” Williams said.

“He drove for us at Townsville and put in eye catching performance by qualifying seventh and then posting a best finish of 11th in Race 1.

Developed by Creation Apps, Track Buddy is the brainchild of Nathan Stacey, who said he joined up with WRT as Wayne (Williams) has been in motor racing for many years and had plenty of great advice.

“We therefor saw them as a great fit to promote our new app. We also thought the V8 Ute category was a great fit because the fans love them so passionately,” Stacey said.

“The category seems more fun and exciting with its short races keeping everyone happy.

While Track Buddy has many features, the most unique is its built in GPS function.

“This whole idea came from a very simple premise. I’m a huge F1 & V8 fan, and each year I go to the Melbourne Grand Prix and I get the standard paper map with my ticket. This is the same when you get tickets for V8 Supercar races,” said Stacey.

“You can could use this or download a PDF from the official site but that’s it. So what I thought was to create a digital map of each circuit with a legend. Sure this would be no different to the fore mentioned. But to make it useful we built in a GPS function to show you where you are, as well as find family and friends. That’s how it all began nearly 2 years ago.

“So download track buddy Aus to your mobile device today for just 99 cents from Google Play and $1.27 from the App Store.”

For more information on Track Buddy go to www.trackbuddy.net.au

The V8 Utes will be seen on track for two practice sessions on Friday 4 December, then qualifying on Saturday at 9.30am ahead of Race 1 at noon. Sunday will see Race 2 at 9.30am and then the third and final race for the year at 2.15pm.