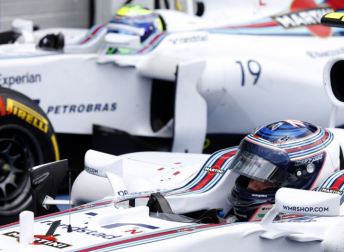 Alan joins Williams from Vodafone Group Enterprise where he has been Finance Director since April 2013. His previous roles include eight years at Cable & Wireless Worldwide PLC where he spent three years as Group Financial Controller. Alan will be responsible for all aspects of operational and structural finance for the Williams Group and will join the company’s Board of Directors.

Current Finance Director Louise Evans will be departing Williams at the end of November 2014 in order to pursue new challenges. Louise joined Williams in 2004 and was appointed Head of Finance in 2005 and subsequently Finance Director in 2011.

Speaking about her departure Louise said: “I have thoroughly enjoyed my ten years at Williams and it has been a privilege to be part of historic milestones for a Formula One team such as our diversification into new business areas and our IPO in 2011.

“The Group is making good progress towards its objective of reinvigorating our Formula One performance, exemplified by a very positive 2014 season, so this feels like the right time to hand over the reins as I seek new challenges in my career. I wish Alan the best of luck in his new role.”

Sir Frank Williams, Founder and Team Principal, said: “Louise Evans has given Williams great service over the past decade and she has been a central figure in the expansion of the business. She will be missed personally and professionally and I wish her the very best of luck for the future.”

Speaking about his appointment as CFO Alan Kinch said: “I am very excited to be joining Williams at this point in its journey.

“It is a privilege to be part of a company with such an illustrious history and I firmly believe that Williams has a bright future ahead, not only on the track but also in the development of the Williams Advanced Engineering business.

“I look forward to working closely with Mike and the rest of the Board to ensure the company fulfils its potential.”

Mike O’Driscoll, Group CEO, added: “Alan is a highly experienced and respected figure in the corporate world of finance and we are fortunate to have someone of his calibre take on the position of CFO for Williams.

“As a Group we have embarked on an ambitious journey to reinvigorate our Formula One team, build a strong Advanced Engineering business, and divest non-core operations.

“We are investing for the future and Alan will play a crucial role in guiding the Group through this transitionary period and beyond.

“I would also like to take this opportunity to pay tribute to our outgoing Finance Director Louise Evans. Louise has played an important role in guiding Williams through landmark events such as our IPO and the global economic downturn in 2008.

“I wish her the best of luck in her future endeavours.”