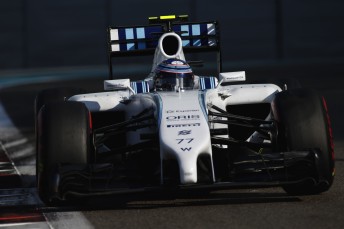 The Williams Formula 1 team has signed a new multi-year partnership agreement with the global consumer goods company Unilever, beginning in 2015.

Unilever will use the unique platform of Formula One to further brand awareness for its leading performance deodorant brand, Rexona. The Rexona logo will appear on the sidepod, front wing and front wishbones of the Williams Mercedes FW37, as well as the team environment and apparel.
Santiago Iturralde, Rexona Global Brand VP, explains: “As the number one global top performance deodorant brand we are delighted to announce this partnership with Williams Martini Racing. Formula One exudes performance and is a captivating sport for millions of our consumers worldwide.”
“The adrenaline, stress, temperature and movement that the drivers, team and fans experience during a Formula One race undoubtedly make them sweat. This is the ultimate torture test for a deodorant – and Rexona won’t let you down,” adds Iturralde.
Furthermore Williams Advanced Engineering, the technology and engineering services business of the Williams Group, will be working with Unilever to provide support in the areas of sustainability and efficiency.
Claire Williams, Deputy Team Principal, Williams Martini Racing, says: “We’re delighted to be partnering with a company of Unilever’s global stature in what is a long term collaboration. Williams has a history of partnering with consumer brands to elevate their global reach and we will be using the full range of marketing tools afforded by Formula One and Williams to help Unilever and Rexona achieve their goals. We both have a commitment to sustainability and we will be sharing Williams Advanced Engineering’s growing expertise in energy efficient technologies to jointly tackle this important issue.”
Williams Martini Racing has enjoyed a recent resurgence in performance with a successful 2014 campaign. Felipe Massa and Valtteri Bottas ended the season in Abu Dhabi on the podium in second and third respectively, securing third place in the Constructors’ Championship.