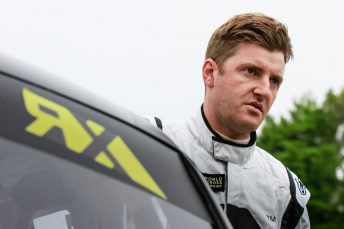 MEDIA RELEASE: Britain’s Guy Wilks has confirmed he will enter all 12 rounds of the 2017 FIA World Rallycross Championship presented by Monster Energy at the wheel of a Volkswagen RX Polo Supercar. Wilks – a two-time British Rally Champion and ex-WRC driver – will compete in Johan Kristoffersson’s old Supercar, the same vehicle which helped the Swede finish runner-up in last year’s drivers’ standings.

Wilks has previously competed in five World RX events (Lydden Hill 2015 and 2016, France, Barcelona and Latvia). In 2015, the Englishman reached the final at World RX of Great Britain but was denied a podium spot due to a puncture.

“To get an opportunity to do a full World Championship is something I’ve always wished for,” explained an elated Wilks, who will enter as an independent entry and be backed by energy drink LOCO.

The 36-year-old added: “To compete in a car that finished second in the Championship last year adds pressure but is the ingredient that can make it realistic for me mix it at the top, even though the bar in World RX is getting raised year on year. I want to thank LOCO energy drink and Marc Blackburn for this opportunity – he saw me drive at Lydden and Loheac in 2015 and believed in me from the start. I’m going to give it absolutely everything to prove his beliefs and also my own and we want to put ourselves up against the best. There’s still a lot of work to do but 2017 is going to be an awesome journey!”

Paul Bellamy, World RX Managing Director for IMG, concluded: “Guy is very familiar with rallycross – he’s regularly commentated alongside Andrew Coley on our TV show. There’s no denying he’s a talent behind the wheel and proved this when he reached the final on his RX debut at Lydden Hill back in 2015.”

LOCO will also back World RX driver Janis Baumanis, who yesterday confirmed he will drive for the all-new STARD team. The Latvian explained: “There are lots of great things going on in our World RX activities before the season starts. We have our partnership with Manfred Stohl and his STARD team and now I am glad to announce that I have got a new and very important sponsor, LOCO. Together we will aim to reach the highest level in the sport.”