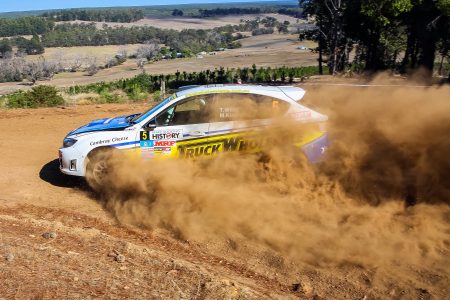 Tom Wilde has made an impressive return to the Australian Rally Championship, narrowly missing a podium result at the Forest Rally on the weekend.

Heat 1 featured an intense battle with Molly Taylor in the factory-backed Subaru, which ended with Wilde taking third place by 5.3 seconds. But Wilde lost time early on Sunday due to a puncture. That set up an exciting afternoon, as he and co-driver Madelin Kirkhouse charged back through the field, narrowly missing out on the final podium place.

“We were looking pretty good for a podium”, Wilde commented after the event. “But we punctured on the second of Sunday’s forest stages. We were only 500 metres into a 12km stage, so we have no choice but to stop and change the tyre. That took a few minutes and by the time we got going again Lewis Bates (next car on the road) had passed us. Then we had to run in his dust, and by the end of the stage we’d lost four minutes.”

That signalled the start of a comeback, as Wilde posted a series of top-three stage times, putting both knowledge of the road conditions and his Maximum Motorsport Subaru to good use.

Going in to the final stage Wilde needed to beat Darren Windus by 18.7 seconds on the stage to claim the final podium position.

“We were on-track to get him. Unfortunately the turbo had other ideas! We lost power halfway through the final stage, and we limped to the end. It was disappointing for sure. But I’m pretty proud of what Madelin and I, and the whole Maximum Motorsport team, managed to achieve against the works teams.”

“There were more powerful AP4 and G4 cars in the field. But we knew we had a proven package with Maximum Motorsport Subaru. We’ve had a bit of experience in this car now so we just tried to turn that into an advantage on roads we know pretty well.”

The Forest Rally was the West Australian’s first ARC event since the 2016 International Rally of Queensland where he took a podium position. Since then he won the 2017 West Australian Rally Championship in a 2WD car, but then sat out most of the 2018 season.

“It was a great result after a few years away from the ARC, particularly being teamed with Madelin. She did an awesome job all weekend. To come so close to third, in her first ARC event and my first for three years, was really pleasing.”

“At the moment, it’s unlikely that we’ll be in Canberra for the next round of the ARC. Last time I was there (in 2016) we managed to claim fourth. We’ll need to secure some backing to continue in the series. But we’ve shown just how competitive we can be.”