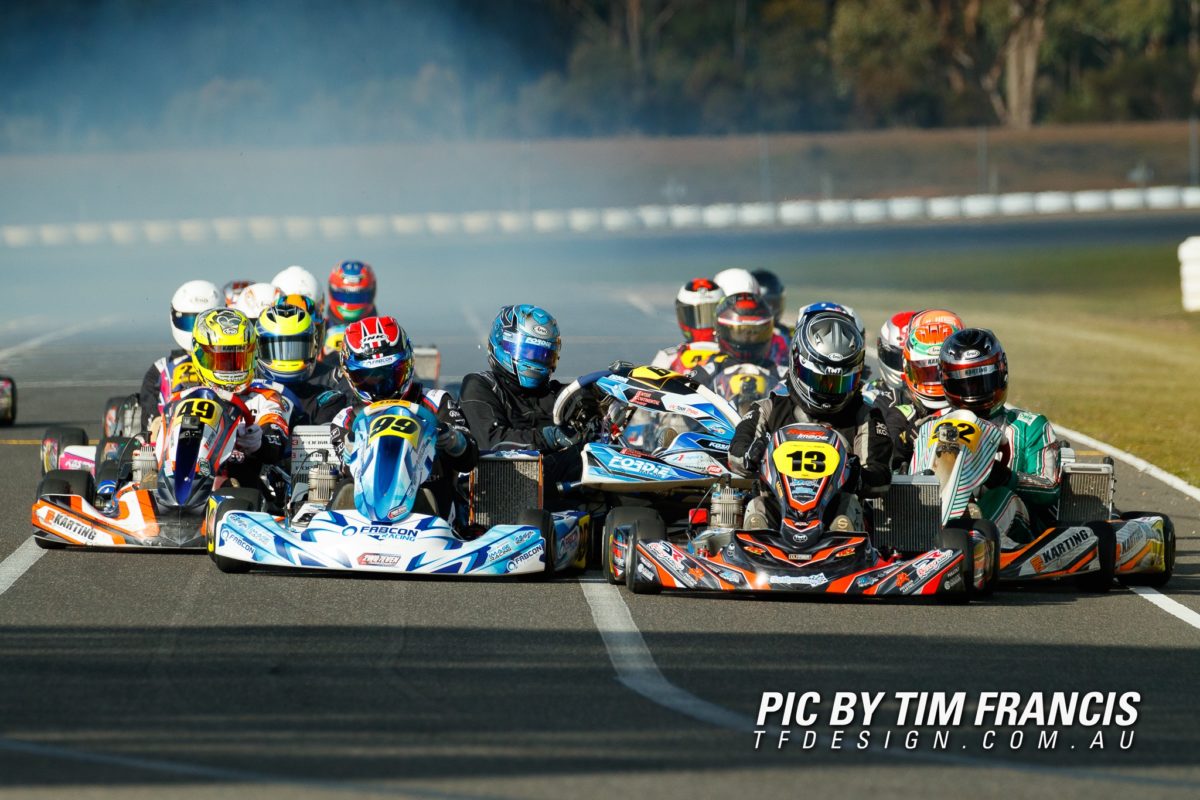 The fourth round of the Golden Power Series took place over the weekend at the Eastern Lions Kart Club.

Under dry conditions all weekend, the biggest series in the state of Victoria attracted 260 entries and crowned another 13 round winners.

As the series gets down to the business end of the year, all drivers were ready to make their mark.

Archie Bristow was able to start Cadet 9 with a bang, taking a dominate pole position over recent Australian Kart Championship round winner Jensen Damaschino and previous round winner Jeremy Kay.

Bristow took out Heat 1 before being excluded from the meeting due to a restrictor issue.

Kay and Damaschino were left to battle at the front, with both drivers taking victory.

Tate Waddington and Jordan Bantick were battling behind for the final podium spot.

Damaschino was able to break clear in the final and take his second round win of the series.

Kay was able to come home on the podium for the second consecutive round.

Waddington round out the top three, with Beau Chambers and Bantick rounding out the top five.

The racing was thick and fast with a pack of drivers always at the front of the field with Gillanders, Costanzo, and championship leader Jack Jenkins all taking out a heat win.

The final was once again a race of twist and turns with Jenkins, Gillanders and Costanzo all leading at stages throughout the race.

Jai George starting out of seventh position, made smooth and calculated moves to hit the front and get a race winning break at a crucial stage.

George was able to take out his second consecutive round win over Jenkins, with Gillanders in third.

Gustav Edgal came home in fourth spot for his best finish of the series, with Costanzo rounding out the top five.

This was another class that had three different heat winners, with Round 1 winner Samuel March taking Heat 1, Thompson taking Heat 2 and Benjamin Munro taking out Heat 3.

The final was race of epic proportion, with six drivers breaking away from the field all within a shot of victory.

March was able to break away from the field and take Munro with him to battle it out.

Both drivers had their chance in the lead on the final few laps with Munro taking out the round win.

March was able to finish second over Thompson in third.

Boulding and Ciconte round out the top five with only seven tenths separate the first five drivers.

Riddell was able to take out pole position and both heats on Saturday with Classon just behind.

Riddell was able to take Heat 3 in another close one, to set up a 12-lap final.

With multiple lead changes and both drivers having their go in front, the race was going down to the wire.

Riddell was able to hold on by the smallest of margins taking her second round win over Classon and Calleja rounding out the podium.

Rowe was able to come home and set the fastest lap in the final, with Garraway rounding out the top five.

Benjamin Munro got his KA3 Junior weekend off to the best possible start putting himself off pole position, with Leo Iannella, Pip Casabene and Alexander Yoannidis not far behind.

The heat racing was off fast pace and high quality, with Yoannidis landing the first blow in Heat 1, Iannella having his turn in Heat 2and Munro taking the third and final heat before the final.

The final was a four kart battle with Munro, Yoannidis, Iannella, and a fast-finishing Casabene all in the battle.

Iannella was able to take the lead in the later stages and take the win over the Pro Karting duo of Yoannidis and Munro.

Thompson was able to take out all three heat races with Trebilcock and Callow right on his tail.

Nikolaj Thomas, Ashton Cattach, Robert Graham, Max Torcasio, and Ethan Bray were all battling for the minor spots behind.

Thompson and Trebilcock were able to break away from the field and were nose to tail the whole final in an epic race of cat and mouse.

Thompson was able to cling on to victory by just four hundredths of a second from Trebilcock in second.

Torcasio moved his way up to the final podium spot in third, with Callow and Thomas rounding out your five.

Taine Venables was able to take out another pole position in KA3 Senior Medium with previous round winner sharing the front row with him and recent junior graduate Zach Findlay in third.

Venables was able to take out all three heat wins bar a two place penalty in Heat 3.

Arnett and Findlay led the chase pack behind with Glenn Riddell, Bodhi Bright, Braden Clark, and Ethan Briggs all racing around the top five.

Venables led the first half of the final but Arnett was taking the fight to the Victorian State Cup champion and the round win honours were going to the wire.

Arnett was able to make a race winning move in the back end of the race and take his second consecutive round win.

Venables and Clark rounded out the podium, with Bright and Findlay battling behind and coming home in fourth and fifth.

TAG 125 Restricted Light had a big field of over twenty drivers with Gerry Westerveld leading the way in qualifying, with championship rival Rhys Kemp sharing the front row with him.

Westerveld showed a clean set of heels in the heats taking out all three wins with Kemp, Flynn Twyford, Mark Seddon, and Sebastian Perrone all battling inside the top five.

Westerveld and Kemp were having a screamer of a battle in the final, with both drivers looking a chance of victory.

Contact was made between the two drivers, with Westerveld ending off worst for wear and out of the race.

Kemp was able to come home and take his first round of the season, with Perrone and Twyford rounding out the podium.

Seddon came home just off the podium with Billy Bishop rounding out the top five.

Clayton Groves was able to add another pole position to his TAG 125 Restricted Medium tally, with Julijan Karlusic and Samuel Davies rounding out the three.

Groves was able to take out both opening heats but struck trouble Sunday.

A DNF result hurt his points after he came in a lap earlier then the chequered flag.

This left Jesse Watkins, Karlusic, Blair Van Ree and Samuel Davies all in the hunt.

Groves was able to lead the final from start to finish, but a post-race infringement dropped the championship leader down to fifth.

This allowed Watkins to come through for the win over Karlusic and Van Ree on the podium.

Brendan Mcswain was able to come through to finish fourth with Groves classified behind him.

Van Ree was able to take victory in heat one due to Jenkins being handed a starting infringement.

Jenkins was able to fight back and take out the remaining two heats, with Van Ree, Brancati, Marc Tune, and Brent Opie left to battle for the minor spots.

Jenkins was able to open up margin and take a comfortable round win, making it his third round win on the trot.

Van Ree was able to come home in second from Brancati in third, Tune in fourth and Zachary Marshall in fifth spot.

Clayton Groves was able to take his second pole position of the weekend in Victorian Combined Masters, with Phillip Stradbrook and Mark Appleby chasing behind.

Groves was able to take the opening two heat races of the weekend but Appleby was able to snatch victory in heat three in a close finish with Leigh Holmes, Stradbrook and Herman Van Ree all around the top five.

The weekend changed complexion dramatically in the final with Groves not taking the start.

This left Appleby and Stradbrook to battle for the round win.

Both drivers had their turn at the front but Stradbrook was able to take the lead and open up a race-winning margin in the final.

Appleby was on the podium in second with Van Ree in third. David Galley and Holmes rounded out the top five.

TAG 125 Light was the fastest and hardest racing all weekend with Bendigo round winner Troy Alger taking pole position from Jamie Rowe, Matthew Domaschenz, Liam Ford, and Will Harper rounding out the five.

Zackary Thompson starting seventh was able to take out a wild Heat 1, with Ford having his go at victory in Heat 2 and Harper making it the third different winner in three heats.

Alger, Rowe, Domaschenz, Steven Riddell and Curt Sera were all coming into play as the weekend went on.

There was a six kart train at the front of the field, with Ford and Alger looking the main chances for victory.

In brutal and gut-wrenching circumstances, Ford crossed the line first but a post-race penalty demoted him to 11th spot.

Alger was able to take the victory from Harper and Sera on the podium.

Harrison Campbell moved forward to place fourth overall, with Domaschenz right behind him in fifth.

Schmidt was able to take out heat one after a first lap incident for Rodgers.

Rodgers bounced back in the second and third heats two to take victory with Schmidt, Jayden Wallis, Ryan Cook and Jason Pringle all chasing behind.

Rodgers was able to open margin in the final and take a strong round victory.

Pringle moved his way up to second spot with Cook rounding out the podium.

Schmidt came through for a consistent fourth place, with Geoff Wyhoon rounding out the top five.

The Golden Power Series will continue when the fifth round of the series takes place on September 10-11 at the Rochester Kart Club.