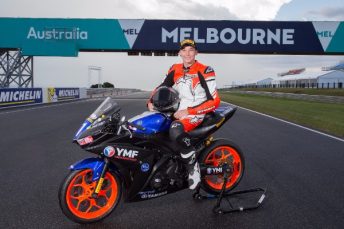 Motorcycling Australia (MA) caught up with one of Australia’s preeminent and prolific riders for his age group, at just 16-years-old Tom ‘E-Gun’ Edwards shortly after taking class wins at the concluding round of the Yamaha Motor Finance Australian Superbike Championship presented by Motul Pirelli (ASBK) at Phillip Island Grand Prix Circuit, October 08.

Having ridden, wrenched, competed, and won on just about anything with two wheels, the apprentice motorcycle mechanic hailing from near Newcastle in New South Wales, Edwards has headed to Spain to contest the final round of the World Supersport 300 Championship at Jerez over the weekend of October 20-22 as part of the World Superbike Championship. Edwards will join the Kawasaki Moto Europe Team, on a Ninja EX 300 for the final round of 2017.

Edwards shared; “After I won the 2017 YMF R3 Cup and came second in the Hi-Tec Batteries Supersport 300 class at Phillip Island for the final ASBK round, I got an offer from an overseas team to go racing as a Wild Card in the World Supersport 300 class in Spain – at the same time as I was due to race in the support category at the Australian Motorcycle Grand Prix! So, we had to make a hard and fast decision about which one to go to. It was a really difficult choice and I’ve got excellent advice from many ex-racers and family. But, we have made the tough call and are going to the famous Jerez circuit in Spain to give it a shot!

“Dad got a call from Kawasaki Moto Europe as soon as we got home from Phillip Island, and they offered us the Wild Card! There has been as heap of people helping us out with the decision but we wanted to go and see how we go on the world scale. I have competed in the Asia Talent Cup previously, where I learned a great deal of race craft, but no other overseas experience really.

“It is a daunting prospect to go overseas and compete on a world famous track, and I don’t know how I will go. I will just take it as it comes. I am not sure what my plans for 2018 are just yet, we’ll see how Spain goes.

“I compete many different disciplines of motorcycling, I don’t care what I ride really, I just want to be on two wheels at all times! I do everything from road race, enduro, motocross to dirt track. Riding bikes is the best form of training you can do to get fit to ride, and I’m always on a bike.” Edwards concluded.

Edwards will be on track at Jerez on Friday, Saturday and Sunday, with his flight back to Australia on Tuesday.