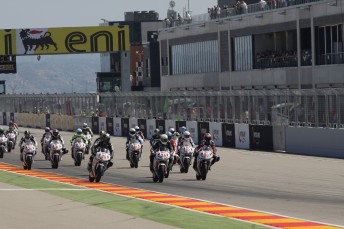 The Spaniard has been racing in the Catalunyan 250 championship and raced at the 5.344km Motorland Aragon circuit as a wildcard but, immediately after the podium, stated his desire to continue for the rest of the 2014 campaign.

He was followed across the finish line by another Spaniard, Javier Orellana – the winning margin just 0.166s – while pole sitter Mika Perez made it an all-Spanish podium, crossing the line just one thousandth of a second behind Orellana.

“I’m really happy to take this win,” said Miralles after the race. “I had no idea that the standard would be so high and the CBR500R is really great fun to ride. I will do everything I can to compete in the rest of the championship.”

Championship points after one of eight rounds: