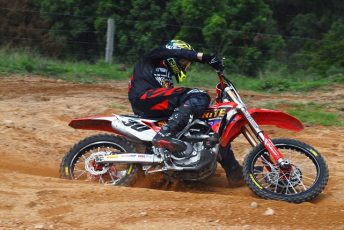 The NSW north coast town of Port Macquarie played host to round three of the prestigious East Coast NSW MX Series last weekend (May 13/14), and at the conclusion of a huge weekend of competition, Penrite CRF Honda Racing riders now lead the standings in three championship classes.

Making his return to racing following a recent collarbone injury, Joel Wightman climbed back in the saddle of his potent Honda CRF450R thumper and completed the round held at the Hastings Valley track in equal first place. The performance sees Wightman lead the MX1 class with 407 points after three of five rounds in the East Coast series.

Facing stiff competition from the likes of Crankt Honda Racing team riders Todd Waters and Luke Clout, Wightman was pleased with his racing comeback, after being forced to sit out the recent Appin, NSW, and Conondale, Queensland, rounds of the MX Nationals.

In the MX2 division, Penrite CRF Honda Racing rider Kyle Webster was in the thick of the action at Port Macquarie, finishing the event in second place overall after some heated battles with national rivals Dylan Wills and Aaron Tanti.

In the fourth MX2 moto, Webster staged a fight back from a poor start to take the moto win and with that lock down the lead in the series standings with 403 points, with two rounds remaining.

On the Sunday the skies opened and the perfect track conditions from Saturday fast became extremely sloppy for all riders, including Penrite CRF Honda Racing youngster Nick Luksich, who lined up in the Clubman Lites division.

Despite the trying conditions, Luksich was in fine form aboard his Honda CRF250R and posted 1-1-2 results in his motos to snare the round win and in the process climb back into the lead of the series standings with 342 points.

Holding the lead in three championship classes of the East Coast NSW MX Series, the Penrite CRF Honda Racing squad is clearly painting the state title chase a shiny shade of red, much to the delight of team manager Mark Luksich.

“The East Coast NSW MX Series is the premier motocross series in NSW and having the team lead three championship classes is a great result,” enthused Luksich.

“Last weekend’s Hastings Valley round was a particularly important one, as the track will host a round of the MX Nationals on July 30, so it was a great chance for Joel, Kyle and Nick to all gain valuable experience at the venue, and especially so for Joel, who was returning to racing after injury.”

The East Coast NSW MX Series continues with round four at Maitland on June 24/25,

Meanwhile the next outing for the Penrite CRF Honda Racing team will be at round four of the MX Nationals at Horsham, Victoria, on Sunday, May 21.