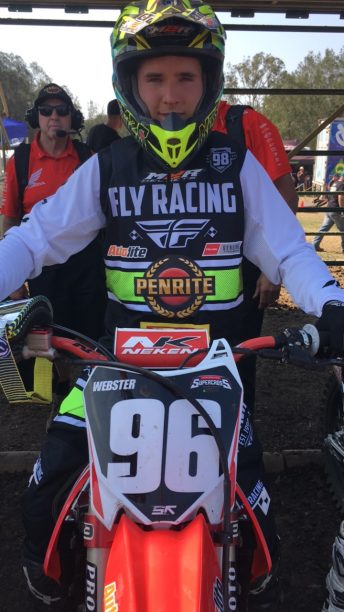 The 2017 Australian Supercross Championship fired into life with a bang on Saturday night (September 23) with round one staged in front of a huge crowd at Jimboomba X-Stadium in south-east Queensland.

The popular venue played host to the country’s best dirt bike racers, with Penrite CRF Honda Racing riders Joel Wightman and Kyle Webster itching to get back on the track and perform under lights on the spectacular man-made circuit.

Competing in the SX1 class for the first time ever aboard his potent Pro Moto Suspension-tuned Honda CRF450R, the Jimboomba event marked Wightman’s return to racing after a lengthy stint sidelined by injuries suffered in a crash at round four of the East Coast NSW MX Series in June.

In his first race back, Wightman qualified 12th fastest before kicking off his evening with a solid fifth place finish in his Heat race. The NSW Hunter Valley rider then went on to finish ninth in the SX1 Final, after circulating as high as fourth in an impressive SX1 class Supercross debut.

“It’s been a while, so it felt awesome to be back at the races and especially at a Supercross,” Wightman enthused after the event. “I’ve been looking forward to being on a 450 in Supercross for so long now and I really enjoyed the event.

“I was happy to be running as high as fourth and then settle into sixth for consecutive laps, and I can certainly take away plenty of positives from Jimboomba and hopefully put them into practice for round two.

“It was just a lack of recent race time and race fitness due to my injuries that cost me late in the race,” Wightman continued, “when I made a few mistakes a couple of laps in a row on a long rhythm section, which certainly cost me time in the last part of the race and put me in ninth place at the finish. Still, it was a solid start to the series.”

Meanwhile Webster lined up in the heavily-stacked SX2 category on his VP race-fuelled Honda CRF250R, and he too was keen to get back to racing after a recent training crash saw him gash his hip when his bike landed on him.

Webster posted eighth fastest time in SX2 Qualifying, then kicked off his night with a fifth place finish in his Heat race.

In the all-important SX2 Final, Webster ultimately carded an 11th place finish, the Camden, NSW, based speedster admitting he was hoping for more.

“I definitely lacked some intensity from not having enough time on the bike while I was injured recently,” Webster explained.

“In the Final I was in a reasonable position and started to get into a good groove, but then I got a bit sketchy in the whoops and went down. The crash twisted up the front end a bit and I could only manage an 11th place finish at the flag.

“It certainly wasn’t the result I was hoping for but with a couple of weeks before the next round, I’ll be putting in the effort to deliver the results we are really capable of.”

“Jumping into Supercross after ten rounds of MX Nationals competition and some injuries is a challenge,” Luksich explained. “I urged my guys to be smart and overall our results at Jimboomba were satisfactory and allow us to build at the next round. Way too many riders tried to win a championship in the first practice session.”

The 2017 Australian Supercross Championship features six rounds across four states over the next two months, with round two set to be staged at Bacchus Marsh in Victoria on Saturday, October 14, before the title wraps up with the grand finale back at Jimboomba X-Stadium in Queensland on Saturday, November 18.