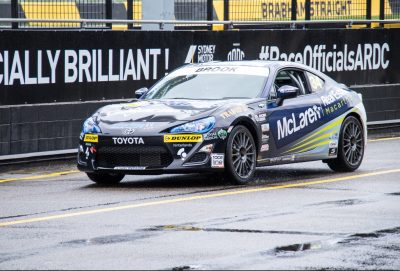 Tim Brook heads into the 2018 Toyota 86 Racing Series with a brand-new car following a busy off-season.

Dubbed Black Betty, Brook has transformed the car which was once his daily driver into a race-ready Toyota 86 in which he’ll campaign through the six event season.

A comparative veteran of the series, Brook proved a front-runner in both 2016 and 2017, and heads into the new year filled with optimism.

It follows a summer break spent stripping down his beloved road car and transforming it into what he hopes will prove a race winning machine.

“We had a tough end to last year, so we stepped back and thought about how to best go about racing again this season.

“The new car is the same car I used to drive to work, so I know its history from the day it was made.

“Over the summer we’ve worked hard and put a lot of hours into making her into a race car, but we’re pretty confident Black Betty will have the goods.’

The squad has wasted no time in getting it out on track, taking to Sydney Motorsport Park to perform and initial shakedown ahead of next week’s series launch.

Though damp conditions masked the true potential of the car’s performance, Brook was satisfied as he completed a full systems check of his new steed.

Brook’s 2017 campaign came to an early and abrupt conclusion while in contention for the title after being caught up in an incident at Bathurst.

It was an experience that’s left him hungry for success heading into the new season, sacrificing his own car in pursuit of success in 2018.

The 2018 Toyota 86 Racing Series begins at Phillip Island in April where it will support the Virgin Australia Supercars Championship.