Who can stop McHugh

Who can stop McHugh 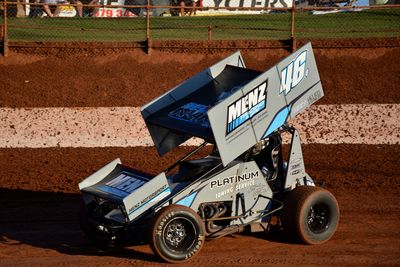 As has been the case at every show since the commencement of competition in the wake of a COVID-induced extended off-season, the entry list is again bulging with competitors across all categories featuring on another packed program at Archerfield Speedway this Saturday night (December 12). Headlined by round four of the East Coast Logistics Sprintcar Track Championship, the night will also feature round four of the Shock Absorber Therapy AMCA Nationals Track Championship and round five of the Wingless Sprint Club Championship, along with Compact Speedcars, Modlites, Stockcars and Formula 500 Juniors.

So far this season, 40 drivers have contested one or more nights of competition at Archerfield, yet only two have found their way into victory lane. Lachlan McHugh has done so on four occasions, with Cody Maroske taking advantage of McHugh’s early demise in round one to become the only other competitor to thus far enjoy the spoils of feature race success. Beyond McHugh and Maroske, just four others drivers have landed on the podium, with the most frequent visitor among these being Luke Oldfield. Remarkably, Oldfield has finished inside the top three in every Archerfield Sprintcar feature race this season which, combined with McHugh’s domination at the front of the field, has left very few opportunities for others to step into the spotlight. Callum Walker has been the best of the rest, twice finishing on the podium, with Kevin Titman and defending track champion Aaron Kelly the only others to do so. Beyond this group, Randy Morgan and former Queensland champ Mitchell Gee are the only others to have finished inside the top five, with the likes of Dylan Menz and Brent Kratzmann having performed strongly in qualifying on more than one occasion without converting that speed into a strong feature race result.

A 31-car field has nominated for this Saturday night, with the track championship regulars being joined by Tasmanian young gun Jock Goodyer, the current Australian Formula 500 champion who has also been recognised as the Speedway Australia Open Wheel Competitor of the Year for his efforts in both Formula 500 and Sprintcar competition, the latter of which included a fourth-place finish in the 2019/2020 World Series Championship. Goodyer will remain in Queensland to contest the upcoming Super 7 Series to be staged between January 2 and 16 at four different venues, three nights of which are scheduled for Archerfield on January 3, 8 and 9. Meanwhile, the appearance of Darren Jensen amongst the entries is particularly pleasing in light of his spectacular crash at the previous round, the second misfortune of such magnitude so far this season for the likeable local racer.

As is so consistently the case these days, Wingless Sprints have garnered a great field for their latest club championship points accumulator, with the relaxation of border restrictions and the quest for tougher competition luring several of the best drivers from northern New South Wales to Brisbane, with David Eggins, Trent Martin, Seiton Young and Jacob Jolley taking on more than 20 locals. Included amongst the home staters looking to fend off the southern raiders are the likes of Ryan Harris, Brody Thomsen, Tim Harris, Lachie Robertson and a couple of former Sprintcar pedallers in James Grady and Liam Atkinson.

AMCA National competition has been nothing short of sensational so far this season and all the indicators suggest that this Saturday will prove no exception as state champ Tony Blanch joins the track championship fray for the first time this season. In his only sojourn north of the border so far this season, the NSW-based Blanch successfully defended his Queensland Championship crown at Kingaroy and is certainly a welcome addition to the field. The previous two rounds of track championship competition have seen Steve Potts emerge victorious on both occasions, while opening round winner Bruce Marshall also serves as a significant obstacle for Blanch in his victory bid. On the back of two consecutive podium results, Steve Price will be very keen to take the next step with a visit to victory lane.

Fresh from yet another feature race win in Toowoomba last weekend, Terry Leerentveld remains firmly entrenched as the all-time top dog of Modlite racing, even though the level of competition within the category has ramped up considerably in recent seasons. Leerentveld has more feature race wins than any other driver in the category, but gone are the days when the two-time Australian Championship winner can expect a somewhat easy passage to victory. In particular, Klinton Hancey has amassed a record of success that would be the envy of most drivers in most categories and his rivalry with Leerentveld has been as exciting as it has been enduring. The duo will face off again on Saturday night, taking on another 16 competitors from across the state, with Dan Lewis, Dylan Hunter, Chris Fing and Adam Walker amongst those looking to spring an upset.

In Compact Speedcar action, Michael Kendall will prove extremely hard to beat as he chases his third consecutive feature race win and his second in a row at Archerfield. The former New Zealand national Midget champion has been unstoppable since taking the reins of the Bolt Pro Racing #18 and, of those trying to keep the Kiwi from winning again, it is the teenage duo of Bodie Smith and Harry Stewart who seem the most likely, although they will need to deliver a faultless performance if they hope to keep Kendall at bay.

Gates open at 1.00pm for competitors and online ticket holders only, with general admission ticket sales and entry from 3.00pm. Early racing will hit the track from 5.00pm and the main program, which will also feature Stockcars and the future stars of the Formula 500 Juniors, will get underway from 6.00pm.