At the helm of the Autosure Insurance R34 Skyline, Whittaker was setting consistently strong laps all weekend; securing fifth place in qualifying and earning himself a bye-run in the Top-32 main event.

The former New Zealand champion then progressed through the competition defeating Dave Steedman in the Mimico Nissan S14, Shane Giles in the WR Twigg / A1 Holmes Nissan S14, and Bruce Tannock in the Achilles Radial S13. This saw a final showdown between Whittaker and the young Nico Reid in the Genuine Vehicle Imports Nissan S15.

Unlike Whittaker, Reid had to battle through the Top-32 bracket after qualifying down in 15th, defeating Jodie Verhulst in the Milwaukee Tools Supra. 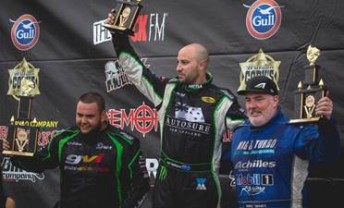 Daniel Woolhouse was next in line heading into the semi-finals, looking like a real threat after qualifying in third; as well as causing a championship upset knocking title contender Andrew Redward out of the Top-8.

Woolhouse would struggle to chase Reid in the semi-final, the former development series winner taking the win, sending Woolhouse and the Century Batteries Holden Commodore into the battle for third.

Reid’s journey through to the final wasn’t made any easier battling intermittent engine timing issues, along with only third and fourth gear available after gearbox dramas throughout practice.

Despite his team’s troubles Reid would press on to battle Whittaker in the final showdown, only to have his car gremlins put him out of the first lap, handing an easy 10-0 victory to Whittaker.

The battle for third place saw a popular victory to Bruce Tannock in the Achilles Radial Nissan S13, Tannock able to power away from Daniel Woolhouse’s VE Commodore in the final sector, earning himself a well deserved podium finish – much to the delight of the turbo teams and supporters.

While the turbo-charged teams put on an entertaining fight in Christchurch it was still a V8 taking the round honours, Whittaker’s Ford 410ci V8 powered Skyline taking a second round victory this season.

The end of the fifth round of the series has blown apart the championship title race, points leader Darren Kelly still managing to hold onto a small lead with 423.5 after putting his Turbosmart Oz Racing R34 Skyline on pole during qualifying.

Despite Kelly being knocked out in the Top-8 by Bruce Tannock it was Andrew Redward suffering the most in Christchurch, Curt Whittaker leap-frogging into second position with a very strong round victory.

Close competition was also served up for round five of the Demon Energy Pro-AM Development Series, Troy Jenkins taking the round victory in the Brian Roberts Towing Nissan S15, C’s Garage driver Joel Hedges battling two blown axles during the competition to pull through into second.

Joel Patterson and Adam Davies took third and fourth respectively, the Pro-AM top four also finishing in order of their now current championship standings which spices up their series title race heading into round six.

The Grand Final is set to kick off over May 23rd and 24th at Pukekohe Park Raceway in Auckland, home to one of the fastest drifting sections in the world. Series organisers are preparing for a big event with pre-sales already well above expectations.

2015 Pro-AM Development Series Points after Round 5