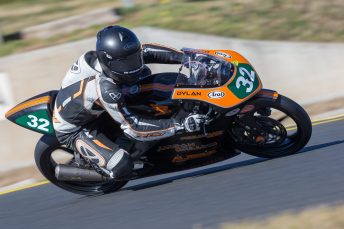 Whiteside took pole position in Qualifying One for today’s race in the Moto 3 / 125GP class. Managing to turn the tables on his rival Kelso, who looked unstoppable in yesterday’s practice sessions. A lap time of 1:40.017 was enough to seal the deal for the Victorian. Dallas Skeer (Ron Angel Classic Racing, Honda NSFR) qualified in third.

It would be Whiteside to get the hole shot into Turn One and lead from the front. Hot on his heels was the Northern Territorian, Kelso. Whiteside maintained his lead but was never able to shake off Kelso from behind. The margin between the two rarely went over half a second.

Whiteside was too canny in defense however, and managed to hang on to his first position, to claim a cool and collected victory in front of Kelso. Behind the leading duo came Dallas Skeer who finished 34 seconds behind. The top three podium placers all riding Honda NSF 250 R machines.

Another highlight of the race was the battle between Doughty, Travis Hall (Motorcycles “R” US, Honda NSF250R), Taran Ocean (Keith Ogilvie, Honda RS) and Ross Taylor (GDR, Honda NSF250R) for fifth place, less than a second separating the group when they crossed the finish line.