Whell in defence mode for 50 lapper

Whell in defence mode for 50 lapper 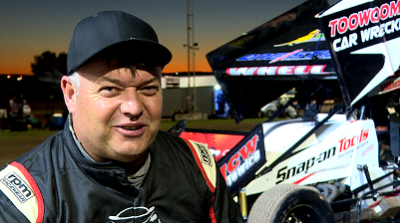 Just over 12 months ago, Whell drove a calculated tyre-conserving race to claim the hard fought “Firecracker 50” and this week will be focussed on repeating his performance at the renamed “Pitstop 50.”

“It’s a unique concept where it’s a 50 lap race with a fuel stop, but none of the teams will know prior to the race when that compulsory stop will be. As a result, no one will know whether to set their car up for a shorter first segment and longer second segment or vice versa, or maybe they will draw the 25 lap ticket out of the hat and it will an even split. Either way, everyone wants to be quick for the last segment, but they don’t want to be too far back in the pack with too many cars to pass,” Whell said.

“Last year we took it easy and watched while other racers used up their tyres battling for position, while we just stayed consistent and were perfectly positioned on the only lap that matters!”

Speedway Event Manager Bennie Bishop still remembers last season’s event well, rating it as one of the best upsets he’s seen in speedway in the nation.

“Whell and the team brought the house down last year with that win. It was smart, calculated, and it caught a lot of people off guard, and the crowd response when he got the win was euphoric!”

“It certainly is a format that opens up all sorts of possibilities and can completely mess with even the most experienced racers and teams, and that’s why we love it!”

The Ultimate Sprintcars will be joined by Modified Sedans and AMCA Nationals, providing a great cross section of dirt racing entertainment, with the opening ceremony scheduled just after 6pm.

Tickets are available from 3pm at the gate or right now from speedwaytickets.com.au with the pits open to the public until 4pm.

Check out Hi-Tec Oils Speedway on Facebook for details and updates.