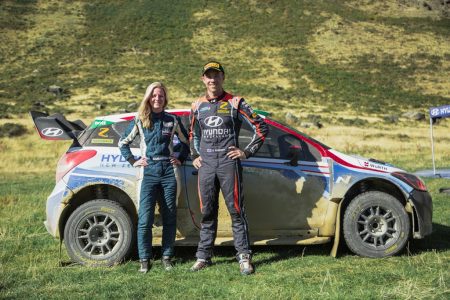 Paddon will naturally focus on his own performance, aiming to set several new stage records on the fast, cambered roads of the Whangarei rally that he enjoys so much and has won four times previously. He also seeks to earn the best possible haul of points towards the Pacific Cup of the FIA Asia Pacific Rally Championship, with Whangarei being the second of two New Zealand APRC events.

At the same time, he’s offered Timaru’s Samantha Gray the opportunity to co-drive for him in the Hyundai i20 AP4 car – a whole new experience for Gray who usually competes alongside Regan Ross in an Escort in the NZ Rally Championship’s historic category.

“Together with Hyundai New Zealand and their Pinnacle mentoring programme for teens, our team is committed to giving young people an opportunity within our team,” says Paddon, who is looking forward to the chance to compete with Gray. “We have done it in the past with Wintec students as technicians and recently employed one of those young technicians. Likewise, with co-drivers, together with John Kennard – the most experienced international rally co-driver in the country – we want to help and give a chance to young co-drivers.”

The third generation of her family to participate in motorsport, 24-year-old Gray started co-driving in 2015 before being selected as one of two female co-drivers for New Zealand’s Elite Motorsport Academy programme in 2017 and, last year, being selected by Rally New Zealand for their Co-drivers’ Academy coaching programme.

“Samantha is one of the leading young co-drivers in the country,” Paddon says. “She has ambitions to take her career international – and if we can help a little towards that with the experience of contesting the Asia Pacific category at one of only two international rallies in New Zealand this year, then that’s what we want to do. Paddon Rallysport is committed to working with young talent on a long-term basis.”

Paddon and Gray have spent a couple of days training together, out on a closed road test day and another day doing pace notes practice. “It’s impressive to see how committed she is, and I have no doubt she will do a great job.”

Meanwhile it’s been one of this season’s tightest turnarounds between events for the Paddon Rallysport engineers with the Hyundai rally car getting a thorough check-over and service to prepare it for the second event of the 2019 rally season. Paddon has also managed to fit in a quick trip to Austria where he tested a Hyundai i30 Pantera Rallycross car in preparation for his upcoming rallycross debut in June.

The International Rally of Whangarei is always a favourite for Paddon. “The iconic WRC stages of old and the huge camber changes make it more like a roller coaster than any other event. I can’t wait!”

He’s also looking forward to catching up with American rally star Ken Block who has entered the event. “It’s great to have Ken here rallying in New Zealand and he will be a huge boost for the event. We didn’t get to compete against him when he was last here a few years ago so will be nice to be on the same event as him. In fact, I think the last time we competed together was in the WRC in 2014!”

This season, a key focus for Paddon is the new format of the APRC with two Pacific Cup rounds in New Zealand and two in Australia. Having secured the maximum points at the first New Zealand APRC round at Otago, Paddon says: “We are targeting the Pacific Cup which also gives us a chance to qualify for the APRC final in China at the end of the year if we choose to do that event.”

The International Rally of Whangarei gets underway on Friday evening and features two legs of competition spread over 16 special stages totalling approx. 270 kilometres. The rally uses Toll Stadium in Whangarei as rally headquarters and the overnight parc ferme.