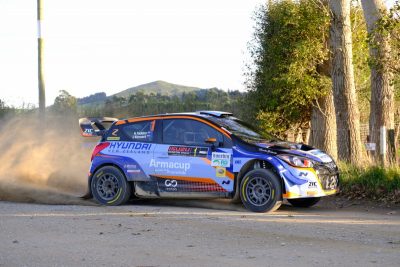 This weekend’s International Rally of Whangarei has an important role in Hayden Paddon’s 2018 competitive campaign. The Kiwi rally star heads back to Europe the day after the two-day Whangarei event concludes and he wants to be in top form for his next World Rally Championship event with Hyundai.

The Whangarei rally is the second round of the 2018 New Zealand Rally Championship with Paddon and the Hyundai New Zealand Rally Team marked as the clear favourites to take top honours again after their emphatic win in Otago three weeks earlier.

First, Paddon has his mind on the job at hand, aiming to make the most of one of his favourite New Zealand events and welcoming stand-in co-driver Malcolm Peden to the team.

“I’m hopping on a plane on Monday to head to Europe for testing and the following week competing at Rally Portugal with Hyundai Motorsport,” Paddon says from the team’s base in Auckland. “For me, Whangarei is really about refining my driving and pace notes, and pushing on at a good pace to be as best prepared for Europe as possible.

“Whangarei is a favourite – it’s where John [Kennard] and I took our first rally win in 2007 so fond memories. The road camber and flow are what stand out here and make these Whangarei stages really special.” Paddon also won the rally in 2009 and 2010.

With Kennard recuperating from recent hip surgery, Paddon put out the call for a new co-driver to join him for this event – ultimately choosing Cambridge-based Peden, age 44.

“Once we knew John and Seb [Marshall Paddon’s WRC co-driver] were not available, we saw this as an opportunity to offer a chance to a Kiwi co-driver to work with us. As we didn’t know what commitments current people had and not wanting to step on toes, we thought easier to put a note out there and see who come to us. Well, that opened a can of worms with a humbling response. Key to us was the chance to work with someone who had solid experience but was still trying to develop their career. Several very good people approached us, but we are confident Malcolm will do a good job and, most importantly, enjoy it. We are already enjoying working with him.”

Peden is excited by the opportunity to compete alongside New Zealand’s most successful rally driver, but also somewhat apprehensive.

“It’s a big standard to meet, to take over from John Kennard,” Peden says, “but I’m also really excited and want to do the very best job I can for Hayden and the team. It’s a huge opportunity for me.”

Peden got stuck into preparing for his biggest co-drive to date, talking with Paddon in detail and watching onboard videos of Paddon and Kennard at work with pace notes. He flew to Blenheim to spend time with Kennard in person and understand more about their pace note system.

“Every driver has their own system and Hayden’s has more description than some. There are similarities to other notes I’ve used in the past, so while I’m a little nervous, I’ll get into the car with Hayden for recce feeling I’ve prepared as well as I can.”

Last year Peden was also one of six co-drivers selected for the inaugural Rally New Zealand co-drivers’ academy, which provided invaluable learning for those contesting international events. “Rally Whangarei is the only two-pass recce event we have in New Zealand and operates under international FIA regulations which are different to our other NZRC rallies. For those of us looking to create an international career, competing with those regulations, knowing how to write your own pace notes with two-pass recce is all part of it.”

“With a tight turn around between events we have just focused on a good going over the car,” says Paddon. “As the car was working well in Otago, we have not needed a test and the team have been busy going through the car with a fine-tooth comb.”

The rally gets underway on Friday evening with two runs of the super special stage in downtown Whangarei. Saturday’s eight stages totalling 150 km run to the north of the city and Sunday’s eight stages takes competitors south to Waipu for around 124 competitive kilometres. Finishers then head to the ceremonial finish at the Quayside Town Basin around 3pm on Sunday.