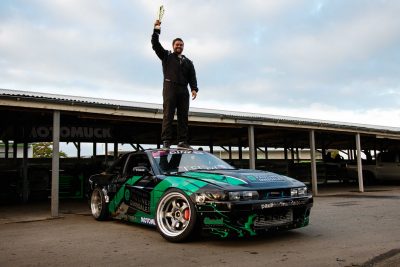 A breakthrough win for Scotty Dinsdale and second for Liam Burke cemented a top two lockout for Team 13 at the latest round of the D1NZ Pro-Sport Series.

Held at Manfeild Circuit Chris Amon in Feilding, Dinsdale finally managed to get one up on his teammate Burke.

Burke currently leads the Pro-Sport Series division of the Link ECU D1NZ National Drifting Championship on 360 points. So far this year he hasn’t finished outside the top two positions.

The team, which is named after the fact that they both drive Nissan Silvia S13s, sit first and third in the points standings.

The win for Dinsdale is a solid return to form after an average start to the year, which saw him crash at Tauranga. The subsequent rebuild saw the car receive a completely new look.

“It’s been a pretty rough start to the season so it’s good to have the car back looking fresh, to make it on the top spot for my first podium is just the best,” Dinsdale said.

“We haven’t really had anything the same for any of the rounds, so we’re adjusting every time we drive it. I can’t wait to send it at Pukekohe.”

Dinsdale said he’s struggled in the past to get into the right mindset, but at Manfeild he finally managed to overcome his mental block.

“The nerves get to me sometime so I just pretend I’m at a track day because without any nerves I know how to drive the car.

“I had to just to push it to the limits because that’s what you’ve got to do to be at the top. It’s good to finally be here.”

Burke and Dinsdale qualified third and fourth respectively, which ensured they’d be on opposite sides of the battle tree. Burke fought Jared Coombes and went to a One-More-Time in their initial battle.

Coombes managed to maintain proximity with Burke in their top-16 battle, but that came at the cost of angle. The judges decided Coombes ran too shallow and Burke got given the advantage. Burke played it safe in his chase and duly got given the pass into the top-eight.

Dinsdale loaned his car to John O’Gorman for the top-16 competition following a mechanical failure for the Falken Tyres-backed drifter.

O’Gorman ran super close with Burke in the chase, but Burke managed to get even closer and matched his line nearly perfectly. Despite being such a close battle, Burke got given the go ahead.

Burke went on to face Simon Lee in the top-four. Lee was shallow on entry and switched too late and was out of the designated zone to do so. The V8-powered Nissan 300ZX couldn’t maintain proximity and missed matching the line of Burke.

Burke and Lee fought hard, but the difference in their battle came down to an inside wheel drop by Burke on the chase, which was enough to force the battle to an OMT. Burke ultimately won the second run.

On the other side of the tree Dinsdale proceeded through to the top-four after Michael Thorley spun at the hairpin in their top-eight battle. He then defeated Central Drift Team driver Taylor James, who made a mistake exiting the hairpin.

The finals pipped Burke against teammate Dinsdale and James against Lee. James went on to beat Lee in their third place playoff.

In the battle of the Team 13 drifters, Burke looked to have the initial advantage after Dinsdale dropped a wheel off at turn three. However, Burke made a big blunder through the transition and straight lined. He dropped back and Dinsdale was duly given the win.

Dinsdale said he was fortunate to get away with the win after he encountered mechanical troubles late in the piece.

“We both know how we drive and I knew Liam would be super aggressive. With that clutch slipping I was nervous, but I knew I had to be on his door the whole time. I felt like on my lead run I threw down one of the best runs of the day.

“I still saw Liam right in my mirror, but he must’ve got lost in the smoke or stage fright up against the teammate. It’s definitely good to get one over him.”