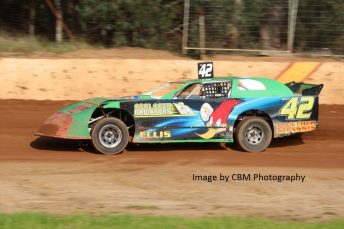 The final race meeting of the season took place at Drouin Speedway on Sunday the 4th of June and great weather welcomed motorsport families and fans to a great day of racing and carnage as the annual Demolition Derby closed the season.

Open Sedans, Standard Saloons, Junior Standard Saloons and a couple of Vintage favourites the Ace of Spades and the Vintage Super Modifieds all had a squirt in the dirt before the big smash em’ up Derby.

In Standard Saloon racing Mitch Blencowe, Travis Evans and Ricky Connor were the most active amongst the field, the three younger fella’s showing some of the veterans like Col Yeomans, Leigh Gooding and Victor Benson a trick or two.

A sensational pass from Blencowe who managed traffic better at the right time, allowed he to take his Commodore to the win from Evans, Connor, Yeomans and Gooding.

Jack Yeomans and Lewis Williams went head to head in Junior Standard Saloon racing with an actual dead heat recorded in heat one of the day. In the end Yeomans got the best of the start in the final and started to pull away from Williams before mechanical failure caught up with Williams. Yeomans the winner in another great season at Drouin for him.

Demonstration events from the Ace of Spades Sedans produced great entertainment with the likes of Bill O’Neil, Bob Maloney and Ray Irvin going at tremendous speeds in their wonderful machines. Samantha Morrow, had her race day debut and was supposed to share the car with Roger and Anthony, however the boys couldn’t pry her from the driver’s seat once she got the bug!

Vintage Super Modifieds love the surface at Drouin also Glenn Barnett was the standout in his beautifully prepared Super Modified from the 70s and early 80s era’s. Graeme Briggs and Dave Hender also showed their prowess behind the wheels with Briggs in one of the early Sprintcar models to hit the Australian shores and Hender in what many fans come to know as a Dirt Track Hot Rod that used to entertain at Nyora back in its days.