In what was the best prelude to this weekend’s Australian Wingless Sprint Championship that any driver could hope for, Luke Weel was in top form during last Saturday night’s Front Row Challenge at Simpson Speedway, proving too good in the feature race. 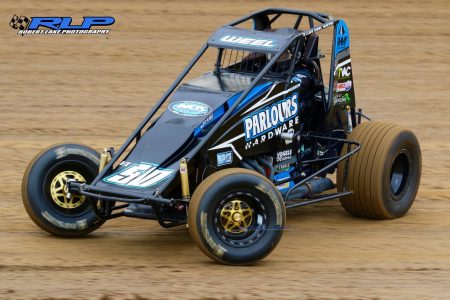 Hoping to get some last-minute seat time prior to the most important event of the season, which will take place this Friday and Saturday night at Warrnambool’s Premier Speedway, 16 drivers turned out to the 400-metre track to clinch top Front Row Challenge honours, but it was Weel who managed to outdrive his rivals to emerge victorious.

Immediately taking control of the lead in the feature race from his pole position start, Weel remained composed throughout the 20-lap distance, hitting each of his marks and ultimately greeting the chequered flag in first place, followed by Ross Jarred, who did well to elevate himself from fifth place to the runner-up spot in what was a career-best performance.

It was a disappointing night for 410 Sprintcar regular Tim Van Ginneken, who will also be making a guest appearance during the upcoming Australian Championship. Van Ginneken experienced a strong run throughout his heat races, only to suffer an unfortunate DNF just one lap into the feature race. Michael McDonald was the race’s only other casualty, joining Van Ginneken on the infield on lap 17.

Earlier in the night, Weel, Lyness, Jarred and Ross were the best in the 10-lap heat races, coming away with a win apiece.

With the 2019 Australian Championship now upon them, 68 nominated Victorian drivers will be hoping to put their best foot forward in an effort to keep the crown in the host state.