There was plenty for Brendon Wedge to be proud of after his hard-charging performance in last Saturday night’s Wingless Sprint 50 Lapper at Manjimup Speedway, and while it wasn’t the easiest of victories for Wedge, it was without a doubt his biggest. 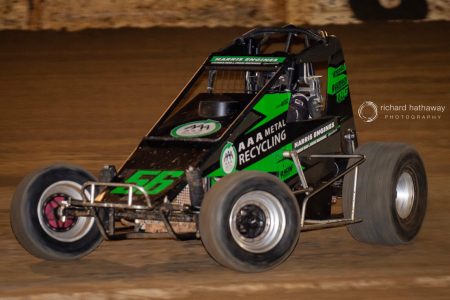 Although this most recent win came off the back of what has been a largely positive season for Wedge, who had so far collected a feature-race win, a runner-up result in the recent Western Australian Title and multiple minor podium finishes, Wedge was immediately up against it when racing got underway, with mechanical woes plaguing his qualifying run.

Experiencing a DNF in his opening heat race, followed by being unable to start his second, Wedge was happy just to get some points on the board in his third and final heat race, coming home third, which banked him enough points to start the feature race way down the field in position 16.

With nothing to lose and everything to gain, Wedge left nothing in the tank in his attempt to move quickly through the pack, impressively making his way into the top 10 just six laps into the 50-lap distance. Knowing that he had a strong car underneath him, Wedge continued to pick away at his competition, eventually reaching the runner-up spot on lap 17 and setting his sights on race leader Matthew Iwanow.

Unfortunately for Iwanow, it then became apparent that he would be unable to complete the feature race, retiring to the infield leaving Wedge to inherit the lead on lap 22, with the latter managing to hold on to it through to the fall of the chequered flag, securing the biggest win of his career so far.

“I was absolutely hell bent on getting to the front in the feature race and once I got there, I had no idea how much of a lead I had so I just had to keep my head town, push forward and make sure I hit my marks,” said the 33-year-old racer, whose Wingless Sprint career had previously been highlighted by winning the 2016-17 season Western Australian Club Championship.

“The level of competition just keeps getting stronger and stronger, which is a real testament to the class. It’s really forced me to continue to push myself to be on top of my game, which has allowed me to score results like this one.”

From the Perth suburb of Serpentine in Western Australia, Wedge initially got his competitive racing career underway in Dirt Karts, where he podiumed in numerous state and national titles, before eventually stepping into Wingless Sprints at the beginning of the 2012-13 season.

Sitting inside the top five in the WA Club Championship point standings, Wedge’s plan for the rest of the season is to remain as consistent as possible to maintain his position, while also building towards a bigger and better 2019-20 season, which will include the Australian Championship being held in his home state at Kalgoorlie International Speedway.

Special thanks must go out to Wedge’s wife Candy and son Judd for letting him do what he loves and also thanks to all of his crew and family for all of their support, because he simply couldn’t do it without them all.

To find out more about Wedge and his team, LIKE them on Facebook by searching F W Motorsport.