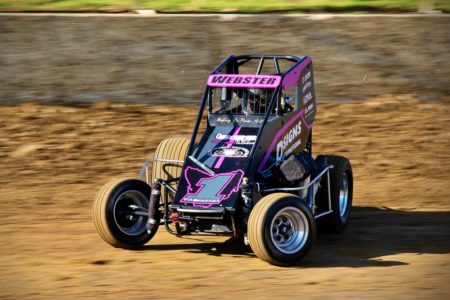 Despite not being able to come away with a result at either the Australian Championship or the Victorian Title over the past fortnight, current Tasmanian Speedcar Champion Brock Webster was still able to show impressive form.

The Sassafras, Tasmania-based racer headed over to the mainland to Victoria last month to firstly contest the Victorian Title at Geelong’s Avalon Raceway and then the Australian Championship at Warrnambool’s Premier Speedway with very little fanfare; however, by the time the two weekends of racing were completed, he and his small team left their mark.

Prior to leaving on his mainland adventure, Webster had set the goal of just trying to qualify into the feature races of both the Victorian Title and Australian Championship, and he certainly achieved that in style by qualifying into the Pole Shuffle on both occasions. Sadly, despite running strongly during both of those feature races, he was unable to reach the finish due to being involved in unfortunate racing incidents on both occasions.

“The expectations of the team and I heading over to the mainland was to just make the feature races at both events, so to do what we did was something that well and truly exceeded our expectations,” expressed the Tas # 1 D-Signs and Promotional supported Fontana powered Spike racer.

One of Webster’s Australian Championship campaign highlights came on the Friday night action, when he was able to mix it with one of the world’s best Speedcar racers in Michael Pickens. He had led Pickens, who had started in the row behind him, for seven laps in a heat race before a few driving errors from Webster saw him lose the lead and go on to finish in third.

Another Australian Championship weekend highlight for Webster was qualifying for the Pole Shuffle and going on to advance a few positions from eighth to start the Australian Championship deciding feature race from position six. In the feature race, he was battling for sixth before a collision with a rival in what was just a racing incident on lap 17 saw him crash into the wall in turn four and sustained damage that saw him fail to finish.

“It was disappointing to have my run in the Australian Championship end the way that it did, but I was still happy with what my small team from Tasmania achieved over the weekend,” the 26-year-old racer, who had a solid running going in the preliminary feature race (evens) at the Australian Championship before spinning out late in the 20-lap event while in sixth place and then going on to finish down the tail of the field in 13th.

“Apart from all of the experience that I have gained, I’m hopeful that my performances over the past two weekends has promoted Tasmanian speedway drivers and also helped the Speedcar class grow in my state.”

Off the back of Webster’s impressive mainland debut in the Speedcar class, he is currently in talks with a team to contest the upcoming major events at Sydney’s Valvoline Raceway (NSW) later next month and in early May.

Webster would like to say special thanks to Ben Redmond for the loan of his van, which the team used to transport their race car and gear around during their mainland trip, and he would also like to thank Speedcars Australia and the Victorian Speedcar Drivers Association for all of their efforts with the running of the Victorian Title and Australian Championship weekends.

To find out more about Webster and his team, LIKE them on Facebook by searching Webster Motorsport T91.