Webster Climbs up a Spot in MX2 at Conondale MX Nats

Webster Climbs up a Spot in MX2 at Conondale MX Nats 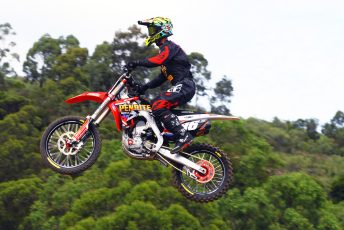 The lush landscape of the famed Green Park motocross facility at Conondale, Queensland, was in prime condition on Sunday (May 7) as the popular venue played host to the country’s leading dirt bike professionals for round three of the hotly contested MX Nationals championship chase.

Perfect weather and an immaculate race track delivered a banner day of motocross competition, which saw Kyle Webster lead the charge for the Penrite CRF Honda Racing team in the MX2 division, while team mate Joel Wightman continues to wait for a broken collarbone to heal.

Meantime Sunshine Coast, Queensland youngster Jesse Dobson made an appearance in the MX1 ranks at Conondale with backing from major sponsors Penrite and Honda, and pitting out of the Penrite CRF Honda Racing rig, he charged to a pair of impressive sixth place finshes.

Climbing aboard his potent CRF250R race bike, Webster was in a determined mood for the Conondale event, kicking off his race day with sixth fastest time in Qualifying.

“Then in the first moto I got a good start, which is so important,” Webster explained.

“But then in the second turn I ran wide and dropped a few places. But I just put my head down and caught back up and moved into third, and then had the chance to get to second when another rider went down – but as I went past I went off the track and bumped neutral and dropped it, which put me back a few places again. I rode hard and caught back up to the leading riders, but just ran out of time and finished in fifth place.”

Regrouping for the second moto, Webster was once again keen to make his presence felt amongst the title front runners.

“But the second moto was tough,” Webster admitted. “I struggled to make all the turns flow nicely, which is so important at Conondale with so many sweeping corners, and I battled to get all the lines right. But even so I was running in fourth all the way to the second last lap, when I was passed and that pushed me back to fifth again at the finish.

“Overall it was a hard day, but I am happy with how I rode,” Webster continued. “We’re so close to the front runners, so I will just keep working hard between rounds to get right up there with the leaders.”

Back to back fifth places in the day’s two motos gave Webster fifth overall for the round, which in turn now moves him up a position to fifth overall in the MX2 championship standings after three rounds.

For second Penrite CRF Honda Racing team rider Joel Wightman, the collarbone injury he suffered over the recent Easter weekend while training forced him to miss the Conondale contest.

“It’s tough to take being sidelined, but I will be off the bike for another week at least,” Wightman said on the eve of the Conondale meet. “I am having more scans later this week and then we will take it from there. Hopefully I can be back on the startline at the next round at Horsham on May 21.”

In the MXD division, Penrite CRF Honda Racing’s young Nick Luksich pushed his CRF250R to 24th overall in class for the round. His 25 championship points now puts him 31st overall in the series standings.

Pitting out of the Penrite CRF Honda Racing team transporter at the Conondale event was Sunshine Coast youngster Jesse Dobson, who has secured support from Penrite and Honda to contest the Australian Supercross Championships later this year. However the relationship kicked off early with his appearance at Conondale – and it appears big things are in store.

Having contested the recent New Zealand Motocross Championships under the watchful eye of legend Kiwi motocross racer Ben Townley, Dobson displayed impressive speed at Conondale, charging to a pair of sixth place finishes in the day’s MX1 motos, the performance suggesting Dobson may get the call to contest further MX Nationals rounds over coming months.

The next outing for the Penrite CRF Honda Racing team will be at round four of the MX Nationals at Horsham, Victoria, on Sunday, May 21.