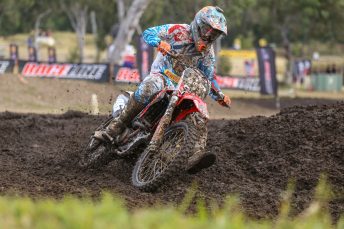 Penrite CRF Honda Racing’s Kyle Webster has continued his strong mid-season form with a big performance at Sunday’s (July 30) eighth round of the MX Nationals staged at Port Macquarie on the NSW north coast.

Competing in the hotly contested MX2 championship, Webster took to the Port Macquarie track with all guns blazing on his potent CRF250R thumper, laying down the fastest time in the morning’s Qualifying session.

Then, in the first of the day’s two points paying MX2 motos, Webster steered his Honda to another podium placing, crossing the line in third place behind arch rivals Egan Mastin (KTM) and Wilson Todd (Yamaha).

In race two, Webster fought back from a tangle with another rider and eventually took the chequered flag in sixth place, his 3-6 scorecard for the day giving him fourth overall for the round.

“Overall Port Macquarie was a good round for me,” Webster enthused after the event.

“I was stoked with my effort in Qualifying, to be fastest is really satisfying and puts you in a strong frame of mind for the races.

“The first moto was good, but truth be told I just didn’t feel quite right on the bike and it actually felt like I was fighting the bike a little, so to finish the race in third was a really good result.

“In the second moto I came together with another rider accidentally and went down, so that sucked. But I fought back to finish sixth and get fourth overall for the day, so all things considered, I’m happy with the round,” Webster said.

Webster is now placed fifth in the MX2 championship behind Todd, Mastin, Mitch Evans (Yamaha) and Hamish Harwood (KTM), with the final two MX Nationals rounds to be staged in Queensland this month.

Webster’s Port Macquarie performance caps off a successful week of competition, which saw him clinch the Pro Lites championship in the East Coast NSW MX Series at the final round staged at Cessnock the previous weekend (July 22/23).

Luksich delivered a determined performance in the final moto of the series, which saw him holeshot the race and carry on to the win and in the process capture the East Coast MX title – by a single point.

Luksich continued that strong form into Sunday’s Port Macquarie MX Nationals event, which featured the final round of the MXD Championship for riders under 19 years of age.

The young Sydney rider pushed his CRF250R thumper to 17th overall in the round, by virtue of 18-17 placings in the day’s two motos, which saw him finish 20th overall in the championship standings.

Meanwhile the Penrite CRF Honda Racing team’s MX1 rider Joel Wightman continues to be missing from action, as he recovers from injuries suffered in a crash at the fourth round of the East Coast MX Series at Maitland.

Yesterday the Penrite CRF Honda Racing team supported a special riding clinic being staged at the Port Macquarie track, the proceeds of which will assist Australia’s team competing in the Motocross of Nations world teams championship being held at Matterly Basin in the UK on October 1.

Then the MX Nationals continue with round nine at Toowoomba on August 13 and the grand finale at Coolum on August 20, where once again the Penrite CRF Honda Racing team will be amongst the thick of the on-track action.