We are the champions!

We are the champions! 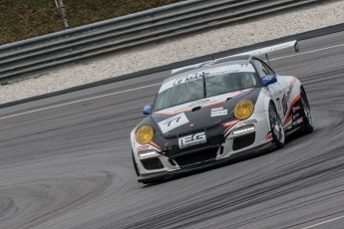 Team NZ Motorsport wrapped up the Asian Le Mans Sprint Cup 2017 at Sepang Circuit last weekend in some style, excellent pitwork from our crew combined with inch perfect driving from Graeme Dowsett and John Curran in the cockpit combined to see us winning both the 1-hour races that comprised the third and final round and that gave us the GT Cup Drivers’ and Teams’ titles.

The target for the weekend had been to win the titles, which we were defending having claimed them both last year, the inaugural season of the Asian Le Mans Sprint Cup, and we came into the final weekend with a healthy lead in the points table, but still needing to get the job done and collect the required points.

With John and Graeme reunited for the final round, our Irishman having to miss the middle round due to business commitments, the usual partnership was restored although this time it would be John supporting Graeme to lockdown the points required to win the Drivers’ title while also pushing to keep the team at the top of the standings.

In the end we won both races convincingly although we had to fight hard for track position and then dig in and work to build up a manageable gap at the front. The drivers were backed up by a crew that prepared a perfect car and executed the pitstops superbly. It all added up to two wins out of two and that makes it five wins in the GT Cup class from the six races that comprised this season’s Sprint Cup.

The qualifying sessions on Saturday morning were very close with Graeme, John and our two title rivals all covered by little more than a second. Graeme locked down pole for Race 1 during the Q2 session however John wasn’t able to get his tyres up to temperature during the following Q2 session which was interrupted by a red flag just as we were preparing for our flyer and that meant we would start Race 2 from P2, right next to our rivals on the grid.

We also had the added input this weekend of Le Mans 24 Hour 2017 winner Earl Bamber as our race engineer.

Graeme started Race 1, lining up our #77 Porsche 997 GT3 Cup on pole but the New Zealander overshot Turn 1 and dropped back behind our rivals. However, he dug in, regained the place after a few laps and started to haul out a cushion – which was crucial to build up as that team’s stronger driver would come in for the second stint. However, the PAS Macau car then suffered an off track excursion that dropped it back down the running order by around 20 seconds.

Graeme continued to build up an advantage at the front and it was job done, John was left to just bring the car home, which he did without an issues, and we had the victory. That was our fourth win from the five races in Asian Le Mans Sprint Cup 2017 so far.

Not just that but we also finished on the overall podium in an incredible third place overall, mixed in amongst the LMP3 and GT3 cars!

With Graeme, John and the crew having combined superbly to get the heavy lifting done the day before we just needed to finish Race 2, which took place last Sunday morning, to secure the final couple of championship points we required to lock down the titles. But we still had to finish and 1-hour of racing at a hot and dry Sepang circuit lay ahead.

But rather than take the cautious and conservative route Team NZ wanted to wrap up the year in style and from second place on the grid, John, who started the car, was quickly into the lead and pulling out a cushion. He handed the car over to Graeme at the mid race pitstop with a clear advantage and Graeme just had to bring the car home intact to claim the victory and make it a clean sweep of wins for the weekend. No fuss and no dramas.

That gave us our second consecutive Asian Le Mans Sprint Cup Drivers’ and Teams’ titles and adds to the excellent trophy haul we have enjoyed during the past four years including GT victory and finishing as runners up in the Sepang 12 Hours, in 2014 and 2015 respectively, as well as a podium finish in the Bathurst 12 Hour.

Graeme Dowsett: “Firstly I would like to congratulate the PAS Macau team, they did an excellent job this weekend, they did improvements throughout the season and gave us a lot of competition and were really fun to drive with. Today’s race was hot, a bit like yesterday, John did a great start to the race and managed to get in front of PAS Macau and from there we built on the lead for what was a fairly easy victory. The car had excellent pace and thanks to crew they did an excellent job and the whole weekend was seamless, it was really good and well done to the crew.”

John Curran: “Saturday, P1 in class and P3 overall was special and we were extremely lucky to have Earl Bamber as race engineer on that day. I really struggled with the heat on the Saturday and a slippery track. Sunday was just as special, having done a poor job qualifying the car in my qualifying session on the Saturday morning I was up to P1 in class exiting Turn 1 and I put my head down and built up a good lead for the handover to Graeme. Craig as race engineer and my daughter Nessa joining us on the podium on the Sunday, rounded out a great week. Obviously a super job by Graeme in securing the Drivers’ championship. The great thing is that Graeme and I are very much equal now, able to throw out 2.14 lap times on demand, which is amazing as I was recently looking at our MSS 2014 time sheets when the best we could do was a 2.21 in qualifying. When you see Nick Foster’s time in our car it is clear Graeme and I are still on a journey of continuous improvement. There is no doubt that PAS Macau Racing forced us to pick up our game and to that end it has been a pleasure racing with them.”