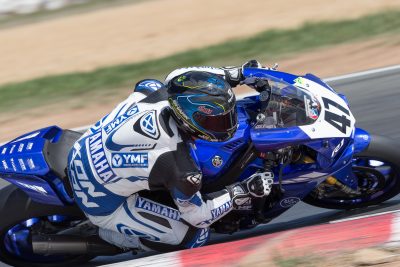 There was plenty of interest to see which of the frontrunners would stand out from the rest ahead of the critical qualifying sessions tomorrow. Maxwell’s most impressive time was a 57.182, which was registered in the third practice session today.

Maxwell won’t be without significant pressure, as there are plenty of impressive times being showcased throughout the day. With many championship points to play for, setting the fastest time on Friday is a great way to start the weekend.

Hometown hero, Troy Herfoss (Penrite Honda Racing, Honda CBR1000SP) posted the second fastest time on the timesheets, with a rapid 57.679. Given how strong he was here last year, he will be strong contender for the wins on Sunday.

With an encouraging time of 57.822, don’t count out birthday boy Daniel Falzon (Yamaha Racing Team, Yamaha YZF-R1M) who finished off the day just behind second place getter Herfoss with a 57.822.

Yet another dark horse for the win could come in the form of three time World Superbike Champion Troy Bayliss (Desmosport Ducati, Ducati Panigale FE) who is hot on the heels of the front three, with his lap time of 57.822.

The action gets back underway tomorrow with qualifying for the YMI Superbike class. Q1 takes place at 11:10am and Q2 at 15:15pm. The victory is all up for grabs!

Can’t make it to the track this weekend? Then make sure to watch ASBK action on SBS 1pm-3pm AEDT, Live on Fox Sports 1pm-4pm or Live Stream asbk.com.au, from 9:30am AEDT Sunday March 18.