Watt Wins Round One

Watt Wins Round One 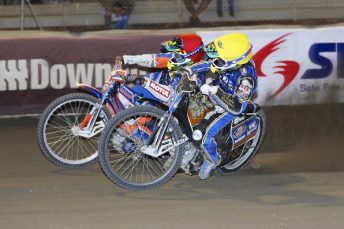 MEDIA RELEASE: Queenslander Davey Watt has won the opening round of the 2017 Australian Solo Speedway Championships presented by CBS Bins at Gillman Speedway on Wednesday night.

The popular 38-year-old was clinical in his heat races where he accrued 13 points, only dropping points in his final ride to Victorian Justin Sedgmen, who after surviving a nasty heat one accident with Rohan Tungate, lead the points on 14.

Joining them in the final was former World-Under 21 Team Cup Captain Nick Morris, and 2013 Australian Champion Troy Batchelor, who scrapped into the final by virtue of a semi-final win over Rohan Tungate, Max Fricke and Sam Masters.

Off gate three in the star-studded final, Watt was majestic, and whilst receiving pressure from Sedgmen on laps two and three, greeted the chequered flag first, beating home Sedgmen, Batchelor and Morris.

Though Watt was overjoyed with the opening round victory, he knows it will be business as usual heading into round two in Mildura on Saturday night.

“There’s a far bigger picture and this is only the beginning, but I feel like this is an achievement. This is a track that I’ve always found hard to feel comfortable on and tonight was the first time I’ve actually felt comfortable on it.” Said Watt.

“I’m super happy with how tonight’s gone but I know that each round is going to be really, really tough. I mean every guy that’s in this field is more than capable of winning a round, It’s not going to take much to fall down the line, so I need to be on top of my game and that’s what I’m working towards.” Said the Queenslander.

Joining Watt at the top of the table after round one, Mildura’s Justin Sedgmen will feel confident heading back to his home circuit for round two after winning his maiden Australian Championship round in last year’s event.

“Hopefully I can go to Mildura and win that again and keep banging in them points. With Watty and myself equal on top, points make prizes and we’ll just see who comes out on top.” Said Sedgmen.

Round two of the 2017 Australian Solo Championships will make it’s way to Mildura’s Olympic Park on Saturday the 7th of January.

Click here for the official score sheet from round one