Andrew Watson experienced the highs and lows of motor racing in his maiden 2015 British GT Championship event at Oulton Park in Cheshire on Easter Monday (6 Apr).

The 20-year-old from Donaghmore, Co. Tyrone, racing a GT3 sportscar for the very first time, made a small but costly error when challenging for the lead in the opening one-hour race.

But Watson and co-driver Ross Wylie (Scotland) bounced back in the second race of the day to bring home their repaired McLaren 650S GT3 sportscar into a well deserved ninth place.

Starting fifth on the 34-car grid in the opening race, Watson forced his way into second place and was challenging for the lead at one-quarter distance but crashed heavily incurring significant damage.

The team, with a little over an hour at their disposal, made considerable repairs to the McLaren allowing Watson and Wylie to finish the day in style with their achievement particularly praiseworthy.

The duo’s top-10 result was recorded despite the organisers loading an 80kg weight ballast onto the McLaren due to both Andrew and Ross being graded “silver” rated drivers.

Furthermore, with both Von Ryan Racing McLarens clocking the slowest speeds in each of the three “sectors” around the 2.692-mile Oulton track in qualifying, the organiser’s “Balance of Performance” would seem to be out of kilter in terms of the McLaren’s true performance.

The third race in the 9-race series is staged at Rockingham, Northamptonshire, on Bank Holiday Monday (3 May). 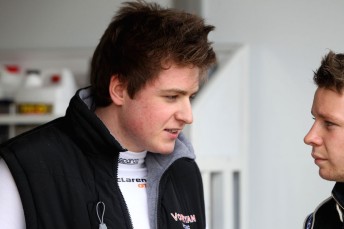 “I was pleased with my fifth place qualifying position, made a good start in race one – from my first-ever rolling start – then did a couple of good passes to get into second place in my maiden GT3 race.

“I reeled in the leader, setting the race’s fastest lap at the time, but made a mistake challenging for the lead which was a great shame. I hit the barriers causing a large amount of damage to the car.

“I felt really bad for Ross and the team who were left with a lot of work to do to get us on the grid for the second race.

“The McLaren GT and Von Ryan Racing guys did an amazing job to repair the car in a short space of time in between the two races to underline the professional set-up I’ve got behind me this year.

“Thankfully Ross and I managed to repay the guys with a top-10 result with some consistent lap times.

“The result gives us something to build on and we can go forward with confidence to the next race at Rockingham.

“Last weekend was an unknown quantity for us in terms of where we’d play out on the grid taking into account the extra 80kg and the McLaren’s ‘Balance of Performance’.

“Both are set out in theory to ‘equalise’ the competition but it seems we’re currently at a disadvantage.”