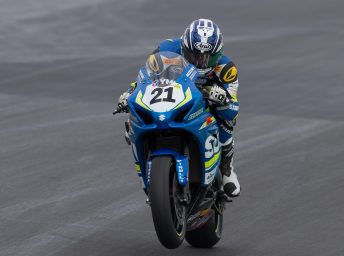 Team Suzuki ECSTAR has caused quite a stir in 2017 within the Yamaha Motor Finance Australian Superbike Championship presented by Motul Pirelli (ASBK). The team’s all new GSXR-1000R and high profile rider, Josh Waters are primed to launch an onslaught at Hidden Valley Raceway, when Round 4 of ASBK comes to Darwin (July 7-9). Team Manger Geoff Wood and competitor Joshua Waters discussed their year so far and their expectations for next weekend’s racing.

As it stands, Waters lies in eighth position of the 2017 Yamaha Motorcycle Insurance (YMI) Championship standings. The results so far have been impressive for the team’s debutant year. Now, at Darwin, the team is set to unveil brand new updates to the already new bike.

Wood discussed what the team has been up to in the ASBK winter break; “We have used the mid-season break to our advantage to go over the bikes. The exciting news for us is that we are using the all-new Suzuki GSXR-1000R that has a brand new update. The main differences are the front suspension and the quick shift. For that guy that wants to go racing, the new Suzuki is incredible straight out of the box. We really are looking forward to debuting it at Darwin to show the crowds what it’s truly capable of.

“We had a few issues at just about every round this year,” Wood said. “Our package has been strong over qualifying laps, as evidenced by Josh’s front row grid placing at Winton (Round 3). We haven’t had the strength in the latter stages of races, but we’re confident we’ve improved minor issues as we’ve had great race distance pace in our recent tests. The last time Josh was there at Hidden Valley, it was the perfect weekend with two pole positions, so it’s a happy hunting ground for him.

“We have Phil Tainton in our corner performing his technical wizardry, and with Josh’s feedback – it’s a magical combination,” according to the Team Manager. “For a brand new team, its remarkable to have such a wealth of knowledge and skill with them both, and that’s down to their close relationship and communication.

“We also really appreciate the level of support we have. Each and every one of our sponsors has been instrumental in our success. The new GSXR responds so well with the Pirelli’s and the feedback that we get from all our testing and track days at Darwin is extremely positive. We really feel that the partnerships we have are integral for us going forward.

“This year, the ASBK as a whole has been amazing, and we are really excited to be apart of it. The TV and live stream coverage has been fantastic from everyone’s perspective.

Suzuki ECSTAR mounted Mildura (VIC) man, Waters discussed his training in the lead up to the hotly anticipated Darwin round. “I’ve been cross training on my Suzuki RM-Z450 dirt bike in the mid-winter break, and I’ve also been up to Darwin to do a couple of track days with the club up there to familiarise myself with the track again. I’ve always been really successful at Hidden Valley Raceway and it’s a track I enjoy.

“We have made adjustments on the bike at each round so far and we are really confident with our set up for Round 4 of ASBK. It’s a really fast track and all the turns are left handers, which suits me as an old dirt track rider!”

In another exciting move for Waters, who can never sit still, he will again compete in the Suzuka 8-Hour in Japan, straight after the Hidden Valley Raceway round on Sunday.

Plans for Team Suzuki ECSTAR in 2018 are really exciting, with a view to expand to a two or three rider outfit. There will be exciting announcements about this towards the end of the year. “Everything we have done this year is gearing up for next year’s ASBK.” According to Wood.